A Baker and a College Porter 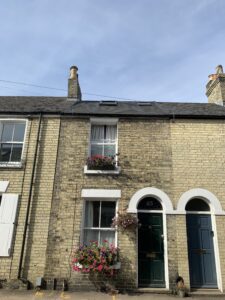 Arthur Thurston died during World War 1.  He was a Sapper in the Royal Corps of Engineers.  His lifestory is on the Mill Road Cemetery website.  Arthur is also remembered on the family monument, alongside his parents Frederick and Minnie, and his brother Albert.

William Boreham, of 83 Sturton Street, married Frances Maud Thorogood in 1909.  He is now 27 years old and a butcher.  Frances is 25.  The couple have a 10 month old daughter called Dorothy Matilda.

William’s widowed mother Matilda is living with them.

When he signs up for the Army on 10th December 1915, his address is 6 Oswald Terrace, Sturton Street.

The electoral register between these dates records that Lionel and Hannah Skinner are living at 85 Sturton Street.

At some point in the early 1920s the couple bought a “Sensational 20s Xmas Offer”. Included in the price was a 24-inch fully jointed doll, a pocket knife, a 36-inch best-quality balloon, a pair of forged steel scissors, a razor of best steel, an excellent razor strop.  Postage was included and it would arrive “well packed in a strong waterproof box”.  So happy were they, that they wrote a letter to the manufacturer.  The letter was published in the Daily Mirror on 30 November 1921.

Sir, – We have just received your 20s parcel and we are more than delighted with it for we feel the doll is worth more than that, and we find that everything is more than equal to the advertisement, and will make it known wherever we can and also wish you every success in this wonderful sensational 20s Xmas offer. – I am, yours truly. L. SKINNER” 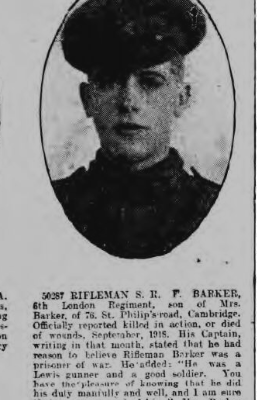