Chesterton remained a royal manor until about 1200, after which it was effectively rented out to Barnwell Priory until the dissolution of the monasteries in 1540. It was then bought by Thomas Brakyn, mayor and MP for Cambridge, and he and his successors split parts of the estate by selling long leases on parcels of farmland. Eventually, in the early 20th cent. a large area that was manor Farm, around King’s Hedges, was sold to the County Council, and has subsequently been used for housing estates, schools and. following a sale to Trinity College, part of a science park. The manor house itself, just north-west of the church on the site now used for sheltered bungalows, was rebuilt in the seventeenth century, refaced in the nineteenth century and demolished in 1971.

Royal Commission Survey of Cambridge 1959: built late in the 17th cent. and comprised a straight range with a staircase projection at the back … the boundary wall running NW from the house, of 17th and 18th cent. brickwork, extends to an early 18th cent brick built barn of two storeys. … in the E corner of the garden, beside the NE arm of Church Street and built partly on the boundary wall, is an 18th century summer house.

For a report on the archaeological excavation of the site in 2014 prior to demolition: 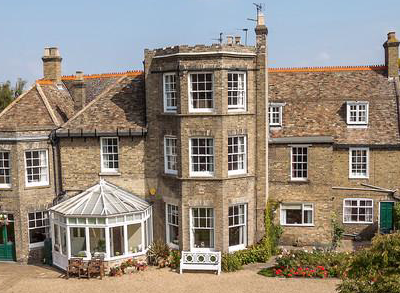