The OWL is to be found on The Boathouse pub, once known as the Rob Roy after the boat club of the same name founded in 1880 by the Church Temperance Society of Chesterton. The Boathouse was also formerly the Spring, but known as the ‘New’Spring to distinguish it from the Old Spring down the road. Cambridge’s pubs are dwindling fast but Mitcham’s Corner  currently has four: The Boathouse, The Waterman, The Portland Arms and The Old Spring.

If you would like to find out more about the fascinating history of the pubs in your part of Cambridge, why not get together a group of friends as a pub history group and contact Capturing Cambridge for support? The Museum of Cambridge itself is housed in the former White Horse Inn at the bottom of Castle Street where you can see the old snug and bar, crammed full of tankards, bottles and other pub paraphernalia.

The INSCRIPTION TO TONY THE DOG is to be found on the small granite water trough outside Lloyds Bank. Chula Chakrabongse studied History at Trinity College, Cambridge. He returned to Thailand after his studies but later married an English woman and retired to Cornwall. In June 1933, the Town Planning Committee ‘resolved that the offer of HRH Prince Chula of Siam of a water trough should be a small one for dogs only and further that the water trough be placed at the junction of Milton Road and Chesterton Road, near the Police Box.’ Cambridge is full of monuments and memorials, each of which tells a story, though many have been forgotten. If you stand at the trough with Lloyds Bank behind you and look straight across at the end of the terrace of house on the traffic island created by the road system, that is where the police station once stood, later replaced by a police box and it is there you will find the MACINTOSH DRAIN COVER.

Cambridge once had several major iron foundries, including Macintosh, Headley, Alsop and Sons and Mackay’s. A great deal of historic street ironwork survives in the city. The items pictured are located as follows: the white decorative BOOT SCRAPER is on Trafalgar Road near the junction with Trafalgar Terrace, where the LION’S HEAD SPOUT can be found on the wall and the much-painted  RAILINGS are outside 143 Chesterton Road. Find out more from ‘Cambridge Iron Founders’ by Ken Alger, Allan Brigham, Brian Hockley and Julie Wilkinson (1996). 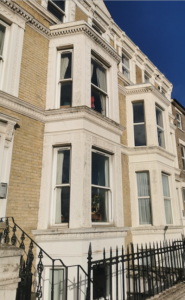 Does anybody know how, when or by whom the beautiful DECORATIVE WINDOW SURROUNDS were made at 145 and 147 Chesterton Road? If you do, send us an email.

The two gable ends, one with CARVED FRONDS and the other at the opposite end with FADED PAINT, are above what is now University Cycles but they used to be part of Charles Mitcham’s Chesterton Drapery Stores which traded at 34 Chesterton Road on the junction with Victoria Avenue from 1909 to 1977, although the business was sold to DuPont in 1944. This painted sign originally read ‘C N Mitcham’s Soft Furnishing Department Famed for fadeless fabrics’ and, along with the original ‘Mitcham’s Corner’ placard above the shop, was a local landmark and meeting point for many years. Find out more about the Mitcham family and the history of the business in Andrew Brett’s books ‘When Mitcham had a corner: the story of Mitcham’s the Chesterton drapery stores’ (2004) and ‘More from Mitcham’s Corner’ (2006). 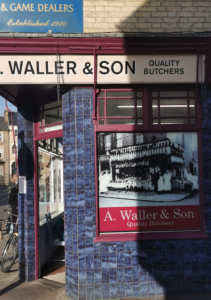 The remaining pictures are of other shops: the BLUE TILES are at Waller’s the butchers on Victoria Avenue, the CLOCK is outside Gautrey’s the now closed jeweller’s  and the watchmaker’s established by Stanley Gautrey in the 1930s at no.48 Chesterton Road, the barely visible VICTORIA AVENUE STREET SIGN has been encroached upon by the ornate shopfronts of University Cycles, Where the BICYCLE ON THE WALL is, and Vaping Liquids at nos. 9 and 11 Victoria Avenue.

Are you interested in finding out more about the local history of your neighbourhood in Cambridge? Do you have memories of how different it used to be? Do you know someone who has lived there for a long time and would have memories to share? Would you like to find out how to go about making an oral history recording or researching the history of your house or street or a local business or school?