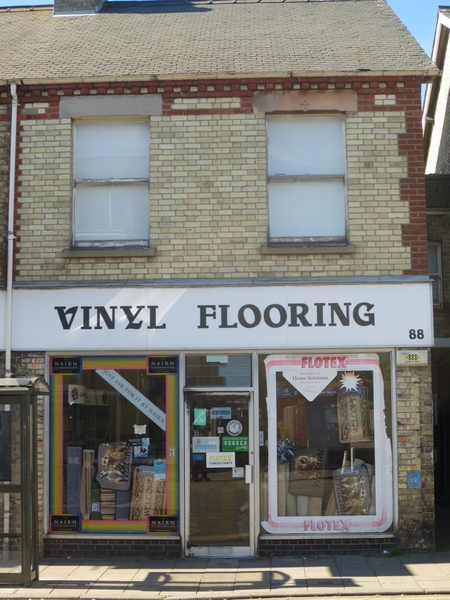 In 1969 Sketchley Cleaners rented no. 88 and a lady named Gladys rented the flat above. When Sketchleys vacated the property in the early 1970s Barker Carpets moved in. They already occupied no. 90 and so they converted the two shops into one.

The original building at this address burned down in November 1977. It was when the Fire Brigade were on strike and the Green Goddess auxiliary fire engines were used. Even so, everything was destroyed. (Information supplied by LA).

The fire prompted a letter to the Cambridge Evening News from Mr P C Cornell who had been tenant of the shop at that address from 1939 onwards. He remembered the dropping of a bomb on the tennis courts next to no.91. One of his bedroom windows blew in, the other blew out.

He recalled that at that time from Rustat Road to Derby Road there were five butchers and four greengrocers, a wool shop, sweet shop, bakers and chemist.

“When the daffodil glut was on, I used to sell 1,000 bunches of 12 between Friday and Saturday. Most men came home from work on bicycles and they would stop and buy four bunches for a shilling.”