Serious allegations concerning the conduct Cambridge undergraduates at dance-hall in the riverside village of Fen Ditton, were made in the police-court at Bottisham (Cambs). *Eileen AHen Woolfe, aged thirty-nine, River Cottage, Fen Ditton, whose dance hall adjoins her residence, was charged that, between November and February 2, inclusive, she permitted premises of which she was the occupier to be used as a disorderly house. Mrs. Woolfe said, “Emphatically, I plead not guilty.”

Peter Woolfe, aged nineteen her son, was charged with aiding and abetting her the offence, and he pleaded definitely not guilty.

It was stated in court that the observation of the police on the premises for the purposes of the case came to an end with the visit of the school proctor the University on February 2.

When he entered the hall, said Sergeant Martin, of the county police, it was in darkness, but by the light of his electric torch he saw there were four men, who said they were undergraduates, and seven girls. He ordered the undergraduates back to their colleges.

Mrs. Woolfe told him that he had no right to enter, the premises were her private property, and the people present were her friends, there her invitation.

Observation by Sergeant Martin was made on Sunday evenings from November 24. He said he saw undergraduates drive up in cars with girls, and sometimes Peter Woolfe took the girls away his car. Dancing in the hall was to the music of a gramophone, except on one occasion, when there was a dance by invitation of members of the University. Then there was a dance band, and he saw nothing wrong. The gramophone, like the lights in the hall, was switched on and off at intervals, as some of the couples preferred to sit out in darkness. When he stood within three feet of swing seat on a verandah the dance hall he alleged that he witnessed misconduct.

Witness alleged that he had seen girls and men in motor-cars outside the premises in compromising positions, and he saw a girl dance on the top of a piano. On January 19 Mrs. Woolfe sat with five men and three girls in the hall in darkness, and after they had told ghost stories, Mrs. Woolfe said, “Let us have a seance.”

When the summons was served Mrs. Woolfe said to witness, “I am glad they have made the charge as bad it can be, as it will be worse for someone when have found out who it is, for I will have them for libel.”  Mrs. Woolfe also said, “How I expected to know who the girls are that come here? I did on one occasion turn a girl away She was most frightfully made up, and I thought I would not let her in. Later I found that she was the daughter of one of the University dons.”

Detective-sergeant Willis, of the Cambridge borough police, said was at Riverside on January 26 when he saw twelve undergraduates and ten women present. The men and women were hugging and kissing.

Policewoman Brown, of Cambridge borough police, who was present January 26, said that several times the lights were switched off and the girls shrieked. Two of the women, she alleged, had been cautioned by the police, and were known as undesirable characters.

Mr. Eustace Pulton, counsel for the defence, said that he would not cross-examine witnesses for the prosecution on that occasion, he desired to consult his clients as to the evidence given.

The case for the prosecution, having been closed, the hearing was adjourned until Monday, March 10. 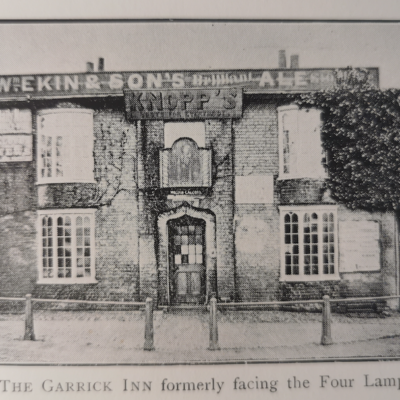