The Enclosure Commissioners awarded Thomas Panton and Jesus the largest shares of the land in Barnwell. Thomas Panton was the successor to the Prior of Barnwell’s Estate; Jesus College had taken over lands held by the nuns of St Rhadegund, and Gonville and Caius College had been bequeathed the lands belonging to the Mortimers of Attleburgh by lady Anne Scroope in 1498.

However, while this was being sorted Thomas Panton died. Lord Gwydir and other successors to Panton’s estate decided to sell part of their allocation; this was divided up into thirty lots and put up for auction 9th November 1809. Caius College were keen to buy as many lots as possible to consolidate their estates. They were mostly successful buying lots 3 to 9 and lot 14; Charles Humfrey bought lots 10,11 and 12. However, the purchase of lot 13 by the Governors of Queen Anne’s Bounty and in particular the purchase of lot 2 by William Lyon, an alderman, were to have far reaching effects on the way the whole area was developed.

Lot 2 was bought by William Lyon for £40. The following year Lyon sold most of the land for 400 guineas to sundry purchasers keeping a slice of it (the area now bounded by St Paul’s Walk and St Paul’s Place) for the erection of a windmill. The land he sold was quickly built over and by the mid 1820s there were no less than 400 inhabitants in this 3 acre plot.

This was what became Cambridge Place and it quickly became notorious as a slum; in 1826 (3rd March) the Cambridge Chronicle spoke of a certain court case: He lived in a miserable habitation in one of the extreme parts of the town called Cambridge Place.

The Caius College Building Estate in Barnwell – Jeremy Lander: It must have been incongruous indeed to have this densely populated rectangle of jerry-built terraces jutting out into what was then still agricultural land on the outskirts of the town. It was certainly an embarrassment to Caius College who had recently acquired that land in the hope of eventually turning it into an exclusive residential neighbourhood. It is likely that the presence of Cambridge Place slowed down the development of Hills Road. The Victorians had a highly developed sense of social exclusiveness, not to mention fear of cholera, and prospective well-to-do lessees were obviously loathe to to take up residence near to that ‘miserable habitation.’

In an effort to ameliorate this difficulty, and expensive, situation Caius attempted to establish what may be termed a ‘pious buffer zone’ between their building plots and Cambridge Place. To do this they laid out a road at right angles to Hills Road close to Lyon’s plot and sold off the intervening wedge of land as a site for a church, a parsonage and a group of almshouses.

The 1851 census lists around 50 occupying families in Cambridge Place without any indication of the house number.  In contrast, the 1841 census does describe each household by house number. However, it does seem possible to place the 1851 households in relation to the 1841 and 1861 addresses.

‘A Disorderly House’ (Barraclough 2018) notes that in the 1840s many women arrested for prostitution gave it as their address.

J Lander write about the land at the eastern end of St Paul’s Road:

East of the almshouses the wedge of Caius land became too narrow for development but in 1862 the College bought the adjoining plot of land, the site of William Lyon’s windmill, from a Mr Gotobed. A high wall was built fencing off this land from Cambridge Place, but even this was not sufficient protection. In 1891 the College Bursar, the Reverend Lock, was forced to write to Mr Barrett, owner of the well known glass and china business:

I am instructed … to ask your attention to the fact that holes have been made in the wall which is the property of the College and which is at the back of the seven cottages at the end of Cambridge Place, which … I am informed are your property.

In a further attempt to rid themselves of this nuisance the College began to buy up the cottages at the end of Cambridge Place: five were bought in 1874, seven in 1876 and a further two in 1878. A public huse by the name of the ‘Bell and Crown’ was also purchased in 1882. Most of these buildings were subsequently demolished and land leased out as stable and garden land, the stigma being such that the land could not be leased for building houses until the turn of the century.

The cottages in Cambridge Place remained occupied until 1939 when most of them were demolished to make way for garages and storehouses, though six cottages at the end of St Paul’s Walk survived until the mid 1960s, occupied in their last years by squatters. Following several disturbances there the squatters were evicted and the cottages demolished. 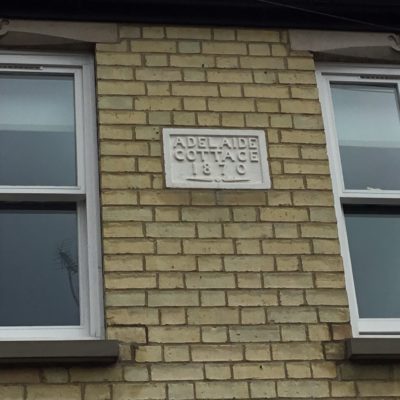