Overview of composers with Cambridge link

This is a list of historic and contemporary composers whose birthplace, studies or career, were closely linked to Cambridge:

Tye is believed to have been born in Cambridgeshire, studied at the University of Cambridge and received his B.Mus. in 1536. In 1537 he became a lay clerk at King’s College.  He became master of the choir at Ely Cathedral in 1543 with the annual salary of £10. Cambridge granted him the degree of Doctor of Music in 1545. He was ordained and then became rector of Doddington, at the time the richest benefice in England.

Amner was born in Ely and had a close association with the cathedral during his life. He received a B.Mus. from Cambridge in 1640.

It is now thought that Gibbons was born in Oxford even though he moved at a young age to Cambridge. His father William had became a ‘wait’, a town musician, in Cambridge by 1567, and though the family moved to Oxford, William was back in Cambridge as head of the town waits around 1588. Orlando’s brother Edward was a composer and master of the Choir of King’s College Cambridge and Orlando joined the choir in 1596. Orlando was granted his B.Mus by Cambridge in 1606. It was thought that Gibbons received his music doctorate in 1622 with the qualifying piece, the eight part anthem O Clap Your Hands, but some have disputed theis.

Rogers obtained the degree of B.Mus from Cambridge in 1658, He wrote music for the city banquet to celebrate the English Restoration of 1660.

He was appointed Professor of Music at Cambridge in 1730. His acknowledged masterpiece is the verse anthem, Lord, let me know mine end.

In 1749 he wrote the ode and anthem O be joyful  to celebrate the installation of the Duke of Newcastle as Chancellor of Cambridge University, and was awarded the degree of Doctor of Music.

Graduated B.Bac. at Cambridge in 1744 and was appointed organist to King’s College Chapel the following year. In 1755 he succeeded Maurice Greene as Professor of Music at Cambridge. In 1756 awarded a Mus.Doc. He was assisted by his pupil William Crotch; he died in Cambridge. In 1768 he set to music Thomas Gray’s Ode for the Installation of the Duke of Grafton as Chancellor of the University. In Cambridge in  1794 he published a collection of Psalm and Hymn Tunes.

John Pratt 1772 – 1855 see 62 Jesus Lane. He was born in Cambridge, son of Jonas, musicseller and teacher. In 1780 he became a chorister at King’s College. In 1799 he was appointed successor to Dr Randall at King’s, then University organist, then in 1813 organist of St Peter’s College. His collection of psalms and hymn tunes was called ‘Psalmodia Cantabrigiensis’.

His oratorio, The Captivity of Judah was performed at Trinity Hall in 1789 when he was just 14.

He became organist of Trinity College Cambridge in 1833 and was simultaneously organist of St John’s College. In 1836 he was made Professor of Music.

He was Professor of Music from 1856 to 1875. He modernised the system of awarding music degrees.

He was appointed organist at St John’s College in 1857 and held the position for 40 years. His most well known work is his chant setting of Psalm 126. He is buried at Mill Road Cemetery.

He is best remembered for his settings of Rudyard Kipling’s Barrack-Room Ballads. He had been elected a Fellow of Trinity in 1863. He was a very good organist and gave recitals at Trinity. After he married in 1893 he resigned from Trinity and devoted himself to musical composition. His most ambitious work was A Song of Trafalgar, a ballad for men’s voices, to words by Edith Nesbitt.

He graduated in music from Cambridge and was organist at Bassingbourne 1868-1873.

He studied at Selwyn College and then in 1889 attained a teaching position at Caius College, first as organ scholar then as fellow. In 1924 he became Professor of Music. His pupils at Cambridge included Vaughan Williams, Bliss, Armstrong Gibbs and W Dis Browne. His family home was at 17 Cranmer Road. He is buried with his wife at the Ascension Burial Ground in Cambridge.

Thomas Ades studied at King’s College Cambridge with Alexander Goehr and Robin Holloway. The Fayrfax Carol was written for King’s College choir in 1997. His Chamber Symphony was first performed at West Road Concert Hall, Cambridge in 1991; the same venue saw the first performance of ‘Life Story’, a setting of Tennessee William’s text, in 1993. 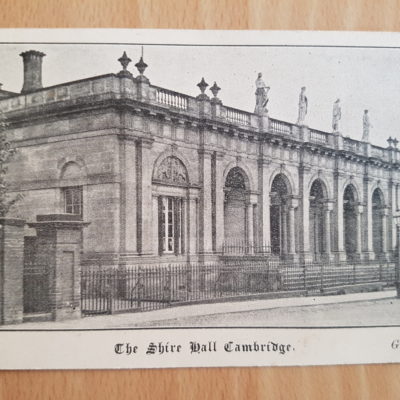