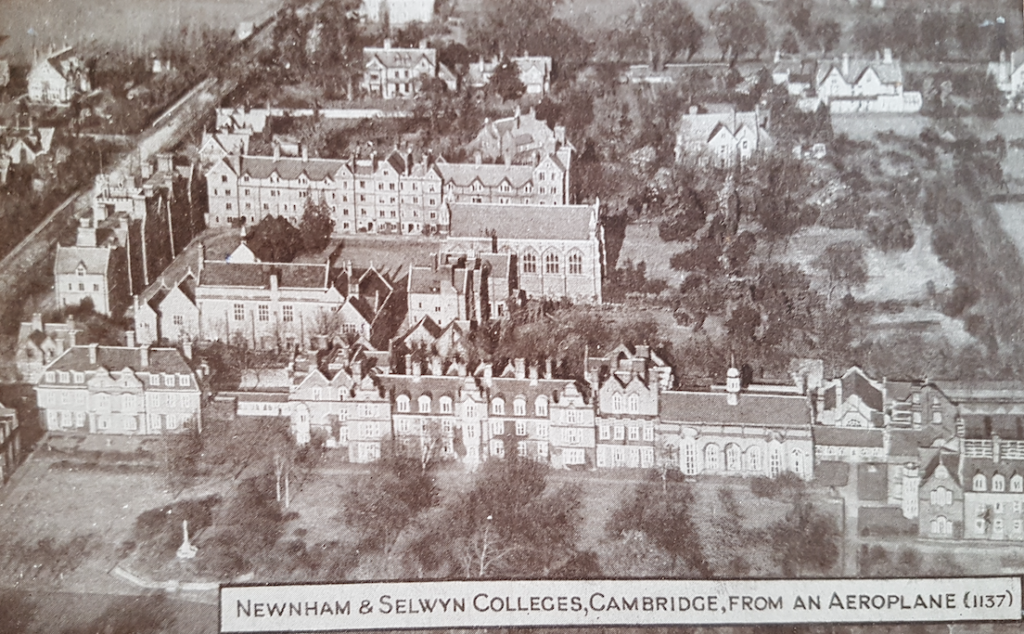 Newnham & Selwyn Colleges from the air circa 1910

General information about Newnham College can be found on Wikipedia. 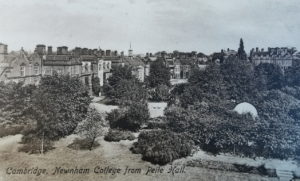 Of particular interest are The Clough Gates. Anne Jemima Clough is commemorated in these bronze gates. It was she who was invited by Henry Sidgwick in 1871 to take charge of a house in town for a group of young women who attended his lectures. Four years later this group settled at Newnham Hall, now Old Hall, and Newnham College was founded.

In 1893, 18 years after Old Hall opened its doors, Basil Champneys completed the Pfeiffer Arch… The Memorial Gates were placed in the archway in honour of the college’s first Principal, Anne Jemima Clough, who had died the previous year. A memorial inscription can be seen on two pear shaped plaques in the centre of the gates:

The first Principal of this College was Anne Jemima Clough in whose memory the alumnae had these gates set up in 1893.

Champneys used a special kind of bronze, 9 parts copper to 1 of tin, for strength and malleability. … The subscribers especially asked hi to incorporate Miss Clough’s favourite flower, the sunflower.

Strong and malleable though they were, the gates were unable to withstand the violent assault made upon them on 20th October 1921. Two Graces had that day come before the Senate, of which one was successful but the other failed: women were at last granted the titles of degrees but were denied any privileges or any part in University government. A large crowd of undergraduates, by no means sober, tore off to Newnham and used a college handcart as a battering ram to storm the gates. The bronze scrollwork on the lower half of the gates was smashed to pieces.

Alice Grace Jenny Bragg, ‘Lady Bragg’, wife of Nobel prize winner Sir Lawrence Bragg, went to Newnham College in 1918 to study history. Her time there is described in a diary in ‘Crystal Clear’ p301f. It was while an undergraduate she met Lawrence Bragg. 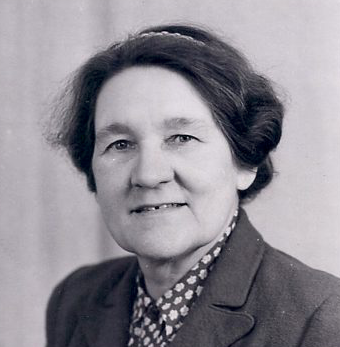