CC&J 9.12.1887: Cambridge Beaconsfield Club.—On Tuesday evening, musical and dramatic entertainment, was given by members of the club in the club rooms, Gwydir Street. Cambridge. A pianoforte solo by Miss Marshall, and a cornet solo by Mr Scargall were admirably rendered. The song “Maggie,” was nicely sung by Miss Fuller. The same remark applies to the comic songs “Mo More” by Mr. Duncombe, and “Put it down to me,’ by Miss Daisy Clarke, who also gave, in response to loud cries of encore, “Oh, I Say, ” “They all love Jack” and “The Lass of Richmond Hill,’’ were given in good style by Mr. Bright and  “Old Brigade,” by Mr. Coppins.  A laughable sketch entitled “Quarter of hour with John Bull,” written specially for the occasion by Mr. E. A. Meaken was then played. and was followed by a dramatic scene, entitled Cherry Bounce,” the acting in which reflected great credit on the performers. The characters were represented as follows: Mr Oldrents, Mr E. A. Meaken: Gregory Homespun (his man servant), Mr. W. Unwin; Gammon and Spinach (farmers), Messrs. J. F. Tarrant and T. Smith, respectively; Doctor’s Boy, Mr. A. W. Fullers and Mrs. Homespun (mother to Gregory), Mr. J. Rumsey.

CC&J 27.4.1888: CAMBRIDGE CONSERVATIVE AND BEACONSFIELD CLUBS. GRAND FANCY FAIR. Many are the occasions on which we have had to speak of the vitality of the Conservative cause in Cambridge. Looking back for only comparatively few years, we have seen it steadily progress, and continuously flourish, until it has now acquired strength in the borough that it never possessed before, and supported by numbers of both ladies and gentlemen far exceeding what might have been expected some years ago. From small rooms in which a limited number of Conservatives could meet, the Party has had, several times, to acquire larger premises for the accommodation of its supporters; the rooms on Peas Hill having become too small, the Alexandra House was made into Club House; again, the membership of the Club swelled, and the present palatial premises of the Club had to be acquired. The circumstances under which the removal was made have already been described in these columns, and are fresh in the public memory. An equally important fact in the development of Conservatism in the borough the erection of the Beaconsfield Club in Gwydir-street, which is essentially the working men’s club. It has a long roll of members, and affords complete refutation of the doctrine, preached by the Liberals some years ago, that a Conservative working man did not exist. Of course this vast development of the Party, with the provision of handsome clubs to meet its wants, has involved considerable outlay, and both clubs are in need of funds, to extinguish their debts, and to provide for future contingencies, and it is with that object in view that a fancy fair has, during the week, been held at the Corn Exchange.

As means of raising money in aid of public institutions, perhaps no effort meets with so much support as fancy fairs. Their popularity is evinced in the large number of visitors they attract, and that they generally serve the purpose for which they are promoted. The decorations are charming to the eye, the music is pleasant to the ear, the social character of these displays cannot fail to “draw” and excellent opportunities are given for tastefully dressed ladies to extract substantial contributions from the sterner sex, and the lady visitors. This has been so in the present case, and we are glad to say that such a sum has been realised as will go long way to liquidate the debts which still overhang the Clubs.

There then follows a long description of the fair at the Corn Exchange and the people who attended it.

1897: (CDN 11.5.1897) Bohee Minstrels at Cambridge: Under the personal direction of Mr D Bohee, banjoist to T.R.H. the Prince and Princess Wales, the Royal Bohee Operatic Minstrels to give them their full title —commenced a week’s visit to Cambridge at the Beaconsfield Hall,  Gwydir-street, last (Monday) night, when the room was well filled. The kind entertainment, unlike so many of its kind, is entirely free from vulgarity and coarseness yet contains an unlimited fund of wit and mirth that could not  fail to appeal to any class of audience. The first part of the programme was composed of songs, serious and comic, all containing delightful refrains of the true plantation sort. Some of the artistes have really good voices and all, when blended in the choruses, produce an extremely pleasing effect. The second part of the programme partook more of the nature of a variety entertainment and in this direction the members of the troupe show their skill to the best advantage, many of them being accomplished comedians, and each being excellent in his especial line. Mr Will Crowson gave a demonstration of what can be done with the aid of the bones, and Messrs Harley and De Marr, pantomimists and acrobats, afforded a highly diverting interlude, rendered all the more novel by the perfect silence the performers maintain during their occupation on the platform. Mr James D Bohee next played a popular march on the banjo, an instrument so often condemned as unmusical. We only advise those who hold this opinion to go hear The “Royal Bohee” and we feel convinced that they will change their opinion. Perhaps Mr Bohee showed his skill the more in his rendering of “Home sweet home” with variations which afforded more scope for his fingers to bring out the effects of light and shade, the soft passages seeming to whisper the air amid the silence of the room, and the crashing notes of the fortissimo resounding loudly above the accompaniment of the full orchestra. Needless to say, Mr Bohee was recalled on every occasion. The Bros Melrose were successful as vocal comedians, and Mr Wal Robbins scored greatly in his black and white sketch. The programme was brought to a conclusion by a new sketch entitled “The Sculptor’s Dream” which included the most realistic pictures of marble statuary, shown off the better by means of  lime-light effects. The entertainment will be repeated each night during the week and Friday is to be a grand plantation night.

1900: CIP 19.1.1900: Children’s party – Tuesday was the occasion of the New Year’s party to the children of the members of the Beaconsfield Club, and the large room of the Club, in Gwydir-street, presented a very pretty aspect, with about 360happy  juveniles present, including about 60 children of reservists engaged in the Transvaal campaign as special guests. The children assembled about five o’clock, and partook of an excellent tea. After the tea, the children were provided with amusements. The parents were admitted after eight o’clock, and dancing was participated in to music supplied by Messrs. Hoppett (piano), and Swornsbourne (violin).

For more information about the Beaconsfield Club see http://www.theedkins.co.uk/jo/gwydir/beaconsfield.htm 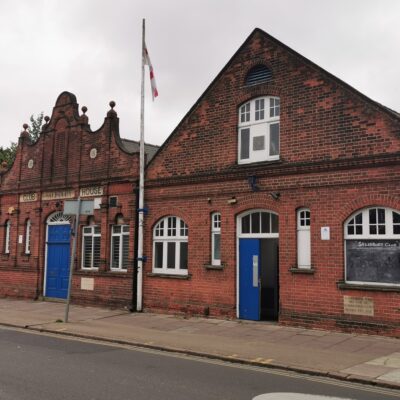