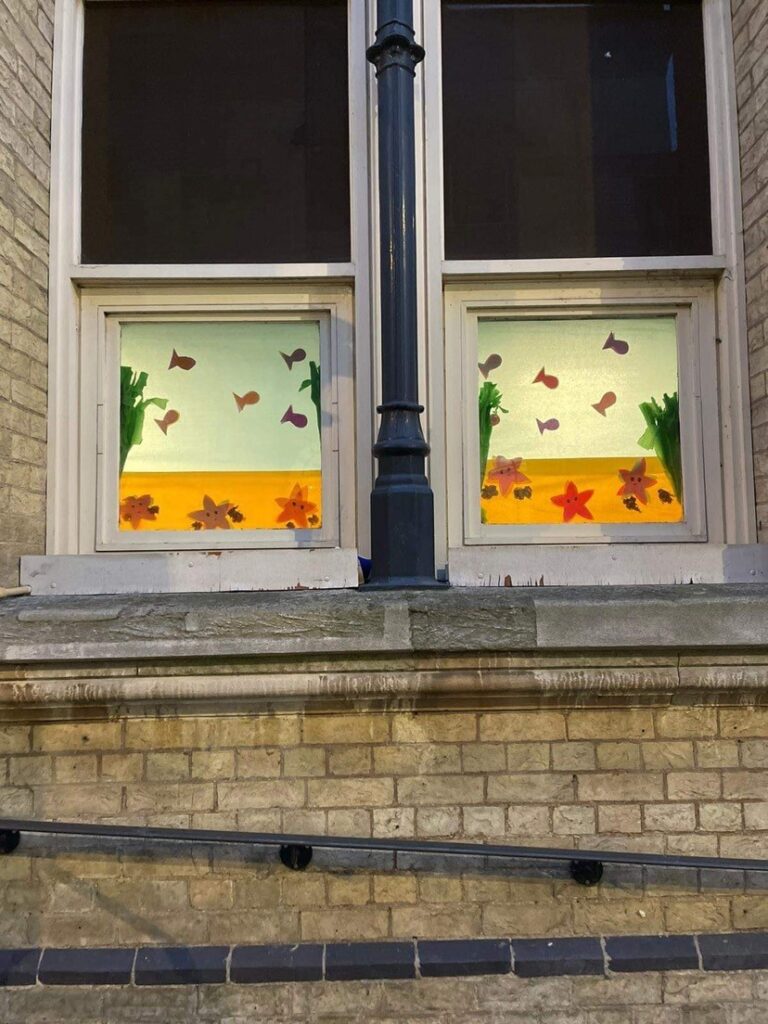 1873-5 by R R Rowe. A very large example, in a mixed Italo-Byzantine style inside and out, yellow, red and dark blue brick. Little reliefs on the front designed by Rowe, carved by Rattee and Kett.

There is a Wikipedia article. 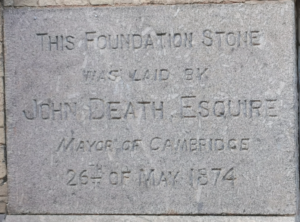 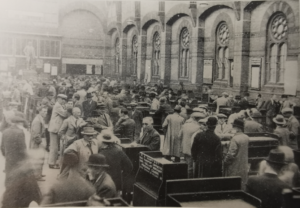 As recored by Enid Porter in ‘Victorian Cambridge’, the Mayor, Mr Death, had shown a firm determinism to  curb rowdyism during his year in office. This had not made him popular with undergraduates. When seven were arrested as a result of noisy interruptions during a concert in the new. Corn Exchange on 8 November, there was a counter demonstration. Josiah Chater recorded on 10th November:

This evening the University men burnt Death in effigy on the Market Place.

On the following day the seven appeared in court:

The Market Place has been pretty lively all day, the University men being up before the magistrates for the row on Monday night. The Courts have been crammed from 11 o’clock till half past seven. Three of them were fined £10 each; one £5; one £1. After it was all over, a lot of them went to J Death’s house and broke his fence and windows and committed other breaches of the peace, and I think 2 or 3 got locked up.

Yesterday, Harrison of Christ’s was fined £15 for rioting at Deathg’s last week and sent down from the College.

19/11/1901: One of the largest companies ever seen at a boxing display was present at the assault-at-arms in Cambridge Corn Exchange. A ten-round contest between two promising local lads, W. Shipp and Bill Topper created a great amount of interest and so gamely did they box that the audience was roused to enthusiasm. A powerful left-hander flush in the face so dazed Shipp that he caved in and Topper was returned an easy winner (Cam.News)

4/2/1902: In at least one thing Cambridge is abreast of the times. She has the craze for ping-pong, or to call it by its more dignified name, table tennis. For a long time past the ping of the racket could be heard coming from the houses of the up-to-date. By Christmas time ping-pong parties had become quite general, ping-pong clubs were formed and now Cambridge has been brought into line with the metropolis by holding a tournament. It was to be held at the Conservative Club, but owing to the large entry it was decided to transfer operations to the Corn Exchange. The one table reserved for ladies was always an attraction. The lady competitors, generally in smart costumes, played a milder game, though there were some who would have made the male sex jump about (Cam.News)

21/2/1901: Sir – Verily the doing of Cambridge Town Council are marvellous. They have recommended the installation of the electric light in the Corn Exchange “owing to the representations made to them by ‘corn merchants and others’ using it”. I should have thought they would have known that corn dealers can only carry on their business by daylight and it is impossible to buy and sell corn by electric or other artificial light. Moreover the business of the Corn Exchange is all over by 4.30, so what do they want the electric light for? If the council thinks it necessary to light it by electricity by all means let them do so, but they should not talk nonsense as they do when they say the traders want it. – J. Toosher (Cam.News)

27/06/1902: Never before has Cambridge Com Exchange been the scene of such a curious sight as when a distribution was made of the large quantity of food intended to form part of the feast to the old folks in celebration of the Coronation. When the news of its postponement was received the cooking of the food had already begun. Several hundred of the poorest inhabitants gathered outside the front gates of the Corn Exchange as quickly as their too-evident infirmities would allow them. Quite a number wrapped quantities of fruit tart in grimy newspapers that could hardly have improved their semi-liquid contents. (Cam.News)

23/2/1903: The Cambridge Corn Exchange exhibition of cycles and motors has become an annual event. Motors and motor cycles are as yet in their infancy and each year sees great strides taken towards perfection. There are on view some fine, up-to-date specimens of motor cars. The Mayor said he was a cyclist of some years’ standing but his experiences of motor cars was very limited. He had been for a ride on a motor car, and thoroughly enjoyed it. Manufacturers were handicapped by stringent laws as to the pace motors might travel over public roads. While so many horses were about it was startling for them to find a vehicle coming at 20 miles an hour and making rather a peculiar noise (Cam.News)

13/7/1904: Few realise the lavish expenditure on the May Balls held in Cambridge Corn Exchange. After the corn merchants have vacated the building on the Saturday evening a small army of workmen take possession. They labour until midnight when the advent of the Sabbath and the strict rules governing municipal buildings shut them out for 24 hours. With the first hour of Monday morning they re-enter and by eight that evening the place is transformed into an artistic ballroom through which not a vestige of the prosaic Corn Exchange is seen. What of the cost? There is not less than £2,000 worth of goods in the ball room; add to that the cost of utilising the Guildhall as a supper room and include the china and plates for the supper and you have a total of some thousands of pounds to provide our moneyed visitors with an evening’s entertainment. (Cam.News)

7/5/1909: A number of undergraduates played havoc with the meeting of the Cambridge Association for Women’s Suffrage. The Com Exchange has a seating capacity of about 1,500 but by utilising the farmers’ desks and standing in every available space, an audience of 2,000 listened to – or interrupted – the arguments. Quite 80 per cent of the meeting was composed of women, of whom Newnham and Girton contributed a considerable quota. But it was the minority whose increasingly violent disruptions caused the meeting to break up in a disorderly manner, though not before the resolutions had been carried by a large majority. (Cam.News)

Cambridge Association for Women’s Suffrage at the Corn Exchange, 1909

7/8/1914: The Cambridge squadron of the Royal Suffolk Yeomanry paraded and were sent to their billets at Ross Street School and the County Girls School. A number of others were quartered in the Corn
Exchange. The streets presented a military appearance. Territorials in uniform carrying their kit bags and rifles were to be seen. Officers in motorcars or motor cycles and orderlies on bicycles were hurrying to and fro, sentries with fixed bayonets were posted at the Corn Exchange and vehicular traffic stopped by the police (Cam.News)

18/9/1914: There were at present about 1,000 soldiers based in Cambridge with another 1,000 expected All the tents were being used by other troops and winter was coming. The Corn Exchange was unsatisfactory because of the small sanitary arrangements. The Girls’ and Boys’ county school were already being used and now the military wanted Morley Memorial and the Melbourne Place schools
for the training of recruits. Emmanuel Church was prepared to give the free use of their schoolroom for the education of the children. The alternative was billeting troops on the better class houses where better class people could supervise them. But the University had been approached and the schools might not be needed, councillors heard. (Cam.News)

16/10/1914: Another trainload of wounded Belgian soldiers arrived at the station and were taken to the Hospital at Trinity College. Now 100 Belgian refugees are expected who will be housed temporarily in the Com Exchange before they are found homes. Not many households can take a whole family but streets might share them. Professors from the University of Louvain professors have arrived and a room at the Engineering Laboratory made available for lectures. (Cam.News)

20/5/1939: Cambridge Corn Exchange was packed with 2,500 undergraduates when Winston Churchill made a striking speech on conscription which was relayed to the Lion Hotel. There was some violence when those unable to get in attempted to force an entrance; during the melee a policeman lost his helmet. Several hundred undergraduates remained outside until a proctor ordered them to disburse. Inside a motion accepting conscription was carried by ten to one. (Cam.News)

1/11/1943: Cambridge Corn Exchange venue for Barn Dance staged by American Red Cross for US forces’ celebration of traditional American custom of Hallowe’en … at one end a Guy Fawkes surrounded by straw . . . dances consisted slow foxtrots and quicksteps to the famous American Flying Eagles band. Were crates of apples and pears from which the many dancers, numbering about 1,800 were at liberty to help themselves. Refreshments served free of charge by an American clubmobile – a canteen on wheelers – about 3,000 American doughnuts, 25 gallons of coffee and 30 gallons of cider, beside orange and lemonade. Pumpkins cut into faces grotesquely illuminated by candles … (Cam.News) 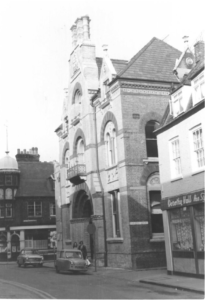 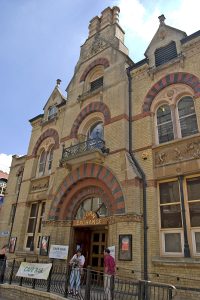 Here is a link to the event page online for information about the event: 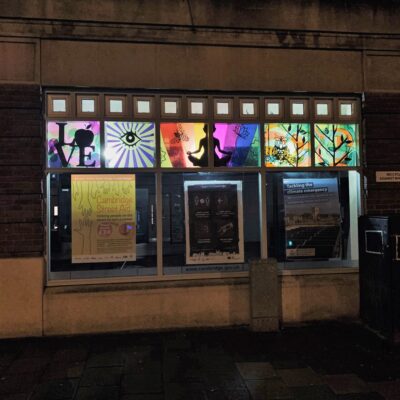