Miss Francis, of No. 8, is recorded in Over The Bridge (a publication focusing on life and issues in Romsey Town) as stating:

This road [Madras] was considered to be, well, just a little bit below standards. Malta Road was absolutely it–if you lived down Malta Road you weren’t anybody. Cyprus Road was a fairly good road. I think Romsey Terrace wasn’t considered to be very grand; then Thoday Street was and Cavendish Road and Sedgewick Street. But Ross Street was posh. (Over the Bridge, No. 20, April 1983.)

She should know: the Francis family had moved into No. 8 around 1919, when William Francis was working as a driver with the Great Eastern Railway (GER).

In 2022 SC sent this reminiscence: Miss Winnie, as she was known to us, lived in that house her entire life.  It was a double block with, what is now, #10 being her cottage/vegetable garden that she would let us explore. I grew up in the house opposite (No. 5) in the 60’s/70’s and she was still there in 1976 when we moved.  Relatives of mine lived further down the street until just a few years ago and advised us when she passed away. A lovely lady who shared her large garden, recipes and tastes of beautiful treats in return for us kids doing her grocery shopping.  I still make her pound cake to this day. 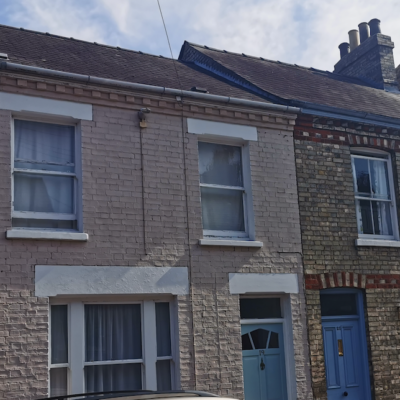