The History of the Smith Family 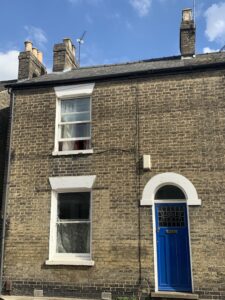 Head of household in 1881 is John Smith a 62-year-old widower who was born in Wickhambrook, Suffolk. The Census records that he is working as a cokeman.  He lives with his son George and his family.  George is 31 and a platelayer; he is married to Sophia who was born in Dalham, Suffolk.  George and Sophia have an  8-year-old son called Arthur.

There are two boarders living with the family.  Sarah Wilkinson is 24 and a college servant. She is Sarah’s sister.  Ruth Beeton is a school child and just 5 years old.  She was born in Cambridgeshire.

The Smith family still live at 12 Kingston Street in 1891. John Smith is now 72, and recorded as a retired garage washer (cleaning railway carriages). This census also shows him as married rather than widowed; however, Smith’s wife is not listed. His daughter-in-law Sophia, 44, and his son George, 41, working as a coal porter, are also still living here. They now have three children: Arthur Smith, 18, a Fitter’s apprentice, Harold Smith, 6, and Maud Smith, 4. John, Sophia and George were all born in Suffolk.

By 1901, John is now listed as a Widower again, and as a  ‘retired railway carriage washer.’ George is still working as a coal porter with the Great Eastern Railway; Harold, now 16, is working as an apprentice to a Boiler Maker. Maud, now 14, has no occupation listed, while Arthur, who would now be 28, is no longer living with his parents.

Also present is Sophia’s sister Sarah and her son Herbert. Sarah, now 43, still works as a College Assistant; Herbert, now 19, works as a ‘journeyman’ baker (meaning he had completed his apprenticeship).

By 1911, George, now 61, still works as a coal porter; Sophia, now 65, and Maud, now 24, have no occupation listed. John is no longer present (likely he has passed away); and Harold has left home. Sarah is still living with her sister’s family, now 54, working as a Silver Cleaner. Herbert has also left home.