The Family of a Tar & Coke Merchant 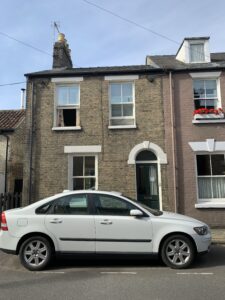 Mary I Saggers, 24, sister-in-law, b. Sunderland

I thought you might be interested to know that there is still an old gas lamp in my garden. I moved here in 1975 and back then the outbuilding that I recently renovated still had the stable where Ernie Saggers had kept his horse.  I was nicknamed by locals ‘Mary from the Dairy’ because the outbuilding had indeed been Ernie’s dairy shop.  I’m reliably told that he used to go out into the outlying villages e.g. Fulbourn and Teversham with his horse and cart and bring back milk, rabbits, eggs etc.  This house has had few owners – the Saggers were here for three generations, until the 60s I believe, then there was a builder, followed briefly by a landlord, and now me for the past 47 years.

This area changed a lot in the 90s – there were few cars, much less money, children all out playing together in the streets, neighbours chatting on their front steps – but I expect you’ve already been told that.