A Railway Engine Driver & a Dealer in Boxes 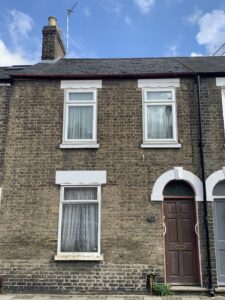 In 1891, 16 Kingston Street is home to the Ringe family: 42 year old James Ringe, a Railway Engine Driver from Essex, and Suzanne Moore, his wife, 40 years old from Essex. Their son Charles Ringe, aged 18, works as a Post Office Clerk, and their daughter Alice is 12, though not in education. The family previously lived at 24 Kingston Street.

In 1901, there is no census entry for 16 Kingston Street; either the residents were away on census night, or the house was unoccupied at the time.

Louisa Susan Baker and her widowed sister Alice Pearce are living here in 1939. Their father was a Sergeant in the Royal Artillery and, as children, they moved frequently around the East Indies.  When he was discharged the family moved to Cambridge and lived for many years at 71 Sturton Street.