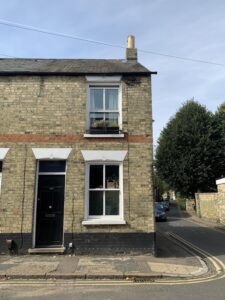 This property was unoccupied in 1891.

Walter Cecil Baker gives this as his address on his Army Service Records.

Walter served in the 1st Battalion Cambridgeshire Regiment in the First World War, joining on the 5th August 1914.  He is employed as a painter and gives his address as 169 Sturton Street. Walter served in France between 14th Feb 1915 and the 21st May 1916.  On the 17th June 1916 he was discharged as physically unfit for further war service.

He is described as 5’7″, with a dark complexion, blue eyes and black hair.  During his service he has been “Honest, sober and trustworthy”.

Walter grew up at 4 Stone Street.