A Hairdressers and a Fish & Chip Shop 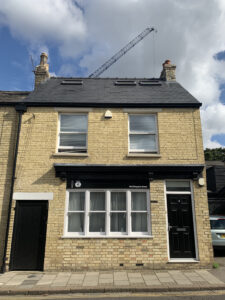 Number 2 Kingston Street is a former shop and terraced house.

The house was uninhabited at the time of the 1881 census.

In 1891, 2 Kingston Street is home to Margaret Clifton, a single 33 year old woman who runs the shop, listed as a ‘General Dealer.’ Also present is the shop assistant, Sarah Rughby, listed as a servant.

10 years later, number 2 is now the home of the Woolfenden family. The hardware shop is run by Rose Annie Woolfenden, aged 26; she is married to Charles John Woolfenden, a 25 year old Plumber. They have one newborn son, Frederick Chas. Also living with them is Harold Walter, Charles’s brother, aged 23, working as a hairdresser.

By 1911, Number 2 is now a fish and chip shop. Running the fish and chip shop are George and Sophia Hall, a married couple. George, aged 69, from Monmouthshire, is married to Sophia, aged 65, from Birmingham; they have two boarders, both of whom works as Fish Fryers: Thomas Payne, aged 36, from Hoxton, and Joseph James, aged 22, from Stepney.

Private Sidney George Hutchinson of the 18th Battalion, Lancashire Fusiliers was killed in action in Belgium on 28th September 1918.  The Cambridge Daily News reported his death and recorded that his parents lived at 2 Kingston Street.  He is remembered on his parents grave stone in Mill Road Cemetery.

Sidney had previously worked for G Holt at 43 Trumpington Street.