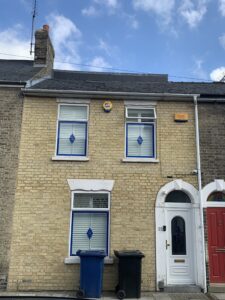 In 1881, 22 Kingston Street is home to the Miles family. James Miles is a 38 year old carpenter from Dorest.  He is married to Sarah Miles, a 45 year old from Witherley in Leicestershire.  Sarah was a widow with two children when she married James.  Her daughter Minnie is 15 and a dressmaker.  The census records her as “Miles”, although her birth name was “Hodgkinson”.

Sarah and James have two children together, Cordelia, 6, and Robert (baptised Edwin Robert), 4.  They also have a 68 year old lodger called Eliza Bowbank.

In 1891, the Miles family are still living at this property.  Sarah’s eldest daughter from her previous relationship is living with them: Jane Hodgkinson, a 28 year old working as a school mistress. As she was born in Yorkshire we can infer that Sarah previously lived in Yorkshire.  Cordelia is now 16 and Robert is 14 and going by the name Edwin; both children are in education.

By 1901, 22 Kingston Street is home to Emma Lenney, a 50 year old from Clare, Suffolk. She is married to Charles Lenney, a 40 year old House Carpenter from Hundon in Suffolk. They live with Emma’s mother, Betsy Vincent, a 73 year old Widow from Foxhall in Suffolk, who is a retired Lodging house keeper.

In 1911, 22 Kingston Street is home to Ada Allen, a 31 year old from Comberton, who is married to Harry Allen, a 33 year old from Hauxton, working as a waiter at a restaurant.