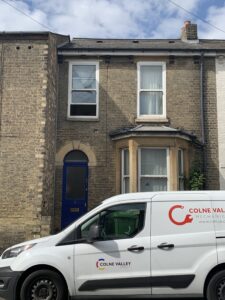 Head of Household in 1881 is James Wright who is a livery stable keeper from Linton.  He and his wife Sarah are both aged 39, Sarah is from Hilgay in Norfolk.  The couple have six children, John (10), Jane (8), Eleanor (6), William & Harriett (5) and Arthur (3).  All of the children were born in Cambridgeshire and the eldest five all go to school.

In 1891, 3 Kingston Street was home to 61 year old Henry Bussard, a French ‘Chef du Cuisine’ who we assume worked at the university, and his 61 year old wife Helen, from Surrey. Clearly, Bussard’s job was fairly well paid, as the couple could afford to hire a live-in servant, 15 year old Emily Hatley.

By 1911, Thomas Sewell, now 61, has become a printer; Sarah Ann, now 59, and Thomas, Alfred and Lily, all still here. Arthur and Charles have left home. Thomas, now 23, works as a compositor with his father, like Charles did before, Alfred, aged 21, works at a Printers Foundry, making the press letters, and Lily, now 19, works as a School Teacher