A Policeman & a Tram Car Driver 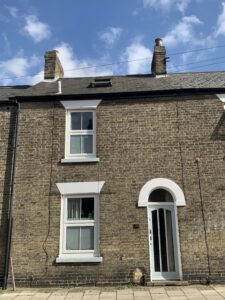 Police Constable Charles Chiddenton, 50, lives here with his wife Martina in 1881.  Martina is 41 and from Reedham in Norfolk.

The couple are buried in Mill Road Cemetery.

In 1891, 30 Kingston Street is home to 30 year old Florence Whiteman, and her husband, 27 year old William Whiteman, working as a builder’s foreman.

By 1901, 30 Kingston Street is the home of the Reader family. Selina Reader, a 62 year old from Linton, is married to David Barton Reader, a 62 year old from Essex, who works as a Tram Car Driver on the short-lived Cambridge Street Tramways (a small network of horse drawn trams that closed in 1914). They have one son, 27 year old Albert Chas Reader, a Grocer’s assistant, born in Royston (meaning they previously lived there). Selina’s sister, Mary Ann Kemp, a 64 year old Widow from Linton is also living with them; and they have a boarder, Frank Parker, a 27 year old Railway Guard from Histon.

By 1911, Number 30 is home to Sarah Elizabeth Day, a 66 year old Widow; she lives with her daughter Delia Odell, a 46 year old Widow working as a dressmaker. Delia has two children, Gertrude, aged 16, and Duke, aged 14, who works as a Errand Boy.