A shopkeeper & a Gardener 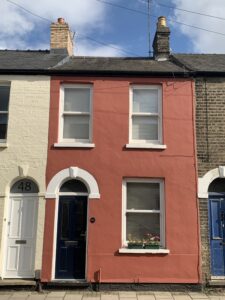 Head of household is Charles Gardener, a 59 year old general smith, who was born in Cirencester, Gloucestershire.  He is married to Sarah, 60, who was born in Hertfordshire.  Their grown-up daughter, Mary Ann, lives with them.  She is 20 and a dressmaker.  The family have a lodger, Charles Clarke; he is 26 and a porter for the Great Eastern Railway.

In 1891, 46 Kingston Street is home to Mary Darnell, a 63 year old Widow from Huntingdonshire working as a Shopkeeper. Her 37 year old daughter, also called Mary, works as a dressmaker. They have taken on a lodger to aid their financial situation: 18 year old Thomas Whittet, a Butcher from Hampshire. He may work at the butchers at Number 50.

In 1911, 46 Kingston Street is home to Sarah Ann Moody, a 64 year old Greengrocer, although 46 Kingston Street is not a Greengrocer’s itself. Her husband Charles Moody, aged 65, from Needingworth in Huntingdonshire, has no occupation listed. They have two daughters living with them; Frederica Moody, a 27 year old working as an “Assistant in Foreign Fancy”, meaning she worked selling fancy goods from abroad. Their other daughter Olive Edith Moody, a 23 year old, works as an Assistant in a fireplace Mantle Showroom.