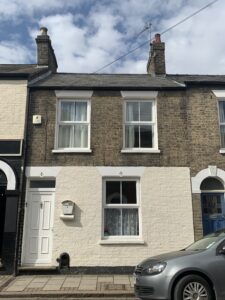 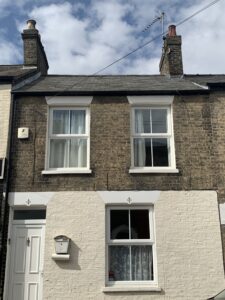 Head of Household is George Green, a 44 year old railway guard.  He was born in Minchinghampton, Gloucestershire.  He is married to Eliza, also 44, from Kilburn, Middlesex. The couple live with their niece Anne, 18, from Chillingham in Gloucestershire.  There are two boarders: Charles Clark, 29, a railway guard from Ireland and Henry Hunt, 21, a clerk from Burwell.

In 1891, 35 Kingston Street is still home to George and Eliza Green. Eliza is now 54 and George is 53.  He continues to work as a guard on the railway.

In 1901, 35 Kingston Street is home to Rhoda Faircliff, a 72 year old from Cheveley; she runs the house as a lodging house. Currently boarding is George Robinson, a 25 year old Bricklayer from Chesterton, alongside William Pearson, an 18 year old Railway Booking Clerk from Tottenham.

Rhoda has been living here since at least 1898.  Her grandson, Henry John Faircliff, gives 35 Kingston Street as his address when he marries Sarah Hazzard in June of that year.

In 1911, 35 Kingston Street is home to James Butcher, a 67 year old Carpenter and Joiner from Mildenhall, Suffolk. He is married to Adelaide Butcher, a 60 year old from Swaffham Prior. They have one daughter, Kate Jessy Butcher, a 34 year old Dressmaker.