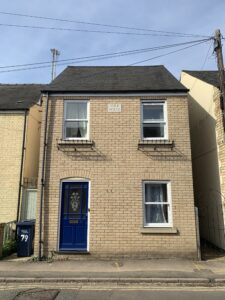 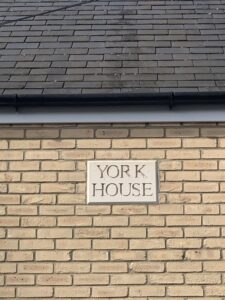 Richard is 25 and works as a carpenter, Luther is 17 and a shoe maker, the youngest child, Eleanor, is 14 and still at school.

7th December 1888 (Cambridge Chronicle and Journal) – To be Sold By Auction. “containing Six Rooms and the necessary offices, having a frontage of 20 feet and a depth of 180 feet (more or less), now in the occupation of Mr Benstead, a respectable tenant, an a rental of £16 per annum, tenant paying Rates. Water laid on.”

In 1891, Shadrach has moved to 86 Ainsworth Street where he lives as a lodger to Mary Carpenter.  His son, Luther, is now head of household here at 81 Sturton Street.

Early in 1891 Luther married Sophia Godman in Camberwell, London.  Sophia is 26 years old and was born in Aldbury, Hertfordshire.

The electoral register shows Luther living here until 1898/99, so his two children, Gwendoline and Charles, would have been born here before the family moved.  In 1901 they can be found at 7 Devonshire Road.

Head of household in 1901 is James Mayle Phillips, a 35 year old railway engine fireman.  He is married to Jessie Louise (nee Franklin).  The couple married earlier in the year.  Jessie lived at 80 Sturton Street prior to her marriage and her parents still live there with her older brother Henry.

In 1911 the couple are living at 4 Ainsworth Street with their two children and James’ father Thomas.

Head of household on the 1911 census is Frederick Start, a 38 year old house painter from New Chesterton.  He is married to Edith Alice (nee Squires) who was born in Cambridge.  When she was younger she lived with her parentsa and siblings at 66 Sturton Street and went by the name of ‘Alice’.

The census records that the couple have had six children, two of whom have died.  The four remaining children are Ada, 16, who works as a silk tie finisher for a knitting company, Frederick (6), Albert (4) and Hilda (2).

Alice’s brother, Albert, died during the First World War.  In December 1919 his widow, Ellen, filled in a form of all Albert’s living blood relatives including their addresses.  She records Alice as living at 81 Sturton Street.