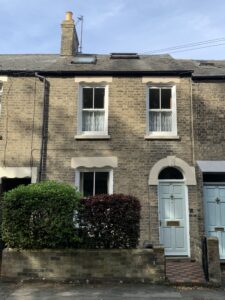 The Starte family lived at 41 Sturton Street for at least thirty years.  Henry Starte, whitesmith, married Mary Ann Wilderspin in 1874.  He was 20 and she was 26.

By 1891 Clara is just called Ethel and there are three more children, 9-year-old Harold, (baptized Oliver Harold Baptist) 6-year-old Elsie and 4-year-old Horace Wilderspin. Herbert is now James Herbert and Florence is working as a Nursemaid for the Lynch family and living at the Curator’s Cottage at the Botanic Gardens.

Interestingly, the couple are not living together on the 1901 census.  Mary Ann is living at 41 Sturton Street with Elsie and Horace.  Henry is living at 6 Donald Road in West Ham with James Herbert, Clara, and Harold.  Herbert is a Grocer and Clara is working with him.  Harold’s occupation is not clear, but he is possibly a student.

Elsie was a draper’s assistant in 1911.  During the First World War she trained as a nurse at St Bartholomew’s Hospital.  She travelled to Calcutta as a nurse on the 13th of January 1922.  On the 3rd of May 1924 she married engineer William Robinson in Asansol, Bengal. Her brother Harold was a witness.

Horace, previously attending the British School, received a Trinity Scholarship to the Perse School in January 1898.  This could be why Mary stayed in Cambridge with her younger children whilst Henry went to work in West Ham with the eldest children.  Horace joined the East India Company in 1911 and became the Deputy Conservator in the Forests Department.

He married May Man in Grimsby in 1928.  The Hull Daily Mail of the 6th of September 1928 reported on the unusual wedding souvenirs. “The bridegroom’s gifts to the bridesmaids consisted of lucky bones of tigers and panthers he had shot, mounted as brooches.  His gifts to the bride included a gun for shooting big game. The couple will live in India.”  Horace returned to Cambridge and died there in 1963.

Clara moved back to Cambridgeshire briefly with her brother James (on the 1911 Census they are both working as grocers), but between 31 Dec 1913 and 3rd March 1917 she was at Guy’s Hospital training to be a nurse.  Clara marries Alexander Mill in 1918, he and James are both Baptist Missionaries working in the Belgian Congo.  There are numerous newspaper records for the Reverend James Herbert Starte between 1918 and 1949 as he travels the country preaching at Baptist Missions.  The Biggleswade Chronicle on 6 October 1922 reports that Hattie Bryant, now wife of Rev. J.H. Starte “had for three years been labouring for Christ on the Belgian Congo.”

“Oliver Harold Baptist Starte, the son of Mr. Henry Starte… was born on January 23rd, 1882.  He received most of his education at the Perse Grammar School, of which he was a Foundation Scholar.  He entered Clare with a £60 Scholarship for Mathematics, which at the end of his first year was changed to a £75 Foundation.  For two years he was a College Prizeman, while he has devoted a good deal of time to the river.” London Daily News 15 June 1904

He arrived in India on the 23rd November 1906 and worked with the Indian Civil Service “in connection with settlement of criminal tribes in the Bijapur [now known as Vijayapura] district”. Harold was awarded the Kaisr-i-Hind silver medal (given for public service in India) in December 1911.

In June 1932 he was given a C.B.E. on the King’s Birthday Honours list, and in 1933 Harold published a book titled “Reformation of offenders in India: A Handbook for the use of Workers amongst Delinquents in India”

Henry and Mary Ann are buried in Mill Road Cemetery.

John Symmonds and his wife Julia move to number 41 Sturton Street from number 23 Sturton Street where the family had lived since 1901.  John is a Police Constable.

John and Julia’s daughter Doris lives with them until her marriage to Frank Allin in 1933.  John and Julia are buried in Mill Road Cemetery.