A Machinist and a Gardener 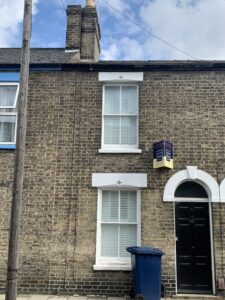 Charles and Abigail Cracknell live here in 1881 with their two month old daughter Georgie.  Abigail, 23, and Charles, 25, were both born in Balsham.  Charles is employed as a plate layer.

In 1891, 68 Kingston Street was home to the Edwards family. Elizabeth Edwards, aged 38, from Wiltshire, is married to Harry Edwards, aged 40, working as a Machinist. They have three children: Maria Edwards, a 13 year old Scholar; Millicent, aged 6; and Bernard, age 3.

By 1901, 68 Kingston Street is home to the Marshalls. Frances Marshall, a 27 year old from Trumpington is married to 26 year old Herbert C Marshall, working as a Gardener. They have a newborn daughter, Lavinia.