A Solicitor's Clerk and a Brewer's Foreman 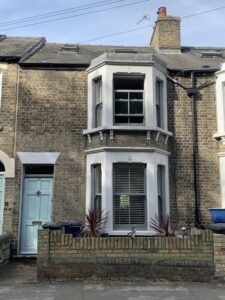 Beatrice A Jeffs, 6, Scholar, b. Cambridge

Head of household in 1901 is John Fordham, a 36 year old brewer’s foreman from Cambridge.  He is married to Emily (nee Bass), 31 years old and born in Grantchester.  The couple have two children, Florence Emily (9) and Arthur John (8).

The electoral registers show that John is registered here from 1898.

The 1911 census records that John and Emily have been married for 22 years and have had two children.  Florence is now 19 and a tailoress and Arthur is 18 and an apprentice boat builder.

Florence married Albert Gaultry in 1916.  The couple are living at 100A Mill Road in 1939, Albert is a shopkeeper (confectioner & tobacconist).  John is living with his daughter at that time.