A Millwright & a Carpenter 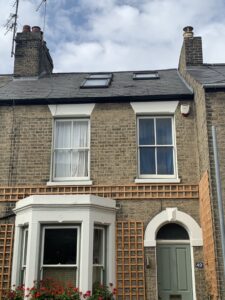 Head of household in 1881 is James Knowles, a 34 year old bookseller, originally from Ashton, Lancashire.  He is married to Amy, 33, who was born in Gedney, Lincolnshire.  The couple have three young children, school boy Albert, 5, Edith, 2, and Florence, 7 months.  All of their children were born in Cambridge.

In 1891, 49 Kingston Street was home to the Beechener Family. Charles Beechener, a 43 year old Millwright from Bedfordshire, is married to Eliza Beechener, a 41 year old from Cambridgeshire. They have two daughters, Bertha, 16, and Florence, 14, neither of whom are working nor in school. Also living with them is Eliza’s son from a previous partner, 17 year old William Shield, a Baker’s Assistant from Norfolk.

By 1901, 49 Kingston Street is home to the Cunnington family. Mary Cunnington, aged 40, from Oundle, is married to Charles Cunnington, aged 41, form Northampton, working as a Carpenter. They have two daughters: Elise, aged 9, and Doris, aged 2. They also have a boarder, 42 year old Robert Glenn, from Sproxton, who works as a carpenter, likely a friend and colleague of Charles.

In 1911, 49 Kingston Street was the home of the King family. Isaac King, a 39 year old from Fenstanton, working as a town Postman, is married to Martha, a 50 year old from Fulbourn. They have an 8 year old son Fred George, who is in School. Also living with them is Isaac’s nephew Henry John Wright, a 20 year old cycle mechanic from Newmarket; alongside Ann Day, Isaac King’s 78 year old Aunt, a paid boarder, hailing from Swaffham Prior.