A Carpenter and a General Labourer 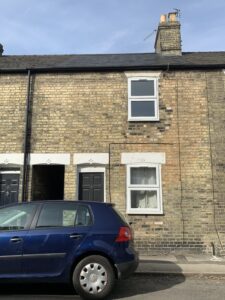 Alfred and Ann Brockett live here between 1891 and 1901.  Alfred is 70 years old and was born in Guilden Morden.  He works as a carpenter.  Ann is 68 and was born in Steeple Morden.

On the 5th September 1902 the Cambridge Daily News reported on how Cambridge celebrated the Coronation of King Edward VII.  In particular they described the “Old People’s Tent”, which contained “a large number of people who were present at the Cambridge festivites on the occasion of the late Queen’s Coronation”.  The article then went on to list the names, ages and addresses of the old people who were present.  This list includes “Alfred Brocket, 5 Sturton Street (83)”