A Carpenter & A Porter 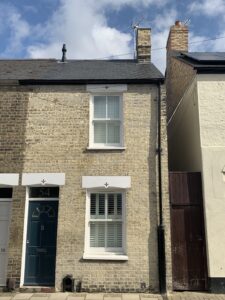 Head of household is Askew Nightingale, a 44 year old engine driver, originally from Trumpington.  He is married to Susan, also 44 and from Hinxton.  The couple have seven children.  The eldest is George, 21, a railway porter.  Frederick is 15 and a railway messenger.  Catherine, 13, Arthur, 11, Minnie and Florence are 7 year old twins. The youngest is William, 5.  The younger children all attend school.

Mary A Lowing, the 18 year old niece of the couple, also lives with them.  She is employed as a dressmaker and was born in Gamlingay, Cambridgeshire.

In 1901, 54 Kingston Street is home to the Lloyd family. Elizabeth Lloyd, aged 62, from Trumpington, is married to John Lloyd, aged 62, an Out Porter. They have four Children: Ruth, aged 37; Ernest, aged 27, a Tailor; Oscar, aged 25, a Drapers Assistant; and Elizabeth, aged 23. Also living with them is Florence, aged 2, the daughter of either Elizabeth or Ruth (unspecified).

By 1911, Number 54 is home to Florence Smith, aged 46, who is married to Charles Smith, a 55 year old Chimney Sweeper. They have two children, both in school: Hector Macdonald, aged 10, and Florence Marjorie, aged 8.