A stone mason, dressmakers, a painter, a machinist, a printer, and a tobacconist and newsagent 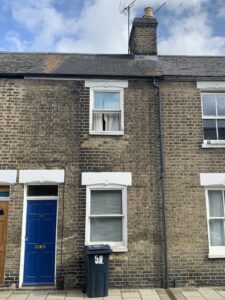 Head of household is George C French, a 35 year old stone mason, who was born in Stony Stratford, Buckinghamshire.  He is married to Elizabeth, 28, who is from Burwell.  The couple have a 2 year old daughter called Ethel. They have taken in two boarders, Emily Palmby, 19, a from Swaffham and Harriet Watts, 20, from Potton, Bedfordshire.  Both young women are dressmakers.

In 1891, 58 Kingston Street is home to the Fordham family. Frances Fordham, aged 21, is married to also 21 year old Alick Fordham, a Painter from Huntingdonshire. They have a 2 year old son, Herbert, whose place of birth, London, suggests that Frances and Alick lived there at some point.

By 1901, 58 Kingston Street is home to the Edwards family. Elizabeth Ann Edwards, aged 48, from Salisbury, is married to Harry Alfred Edwards, aged 50, working as a machinist on the Great Eastern Railway. They have two sons, 13 year old Bernard and 8 year old Thomas. Also living with them is a boarder, 50 year old James Stradwick, a Printer with the Great Eastern Railway from Wormley in Hertfordshire.

by 1911, 58 Kingston Street has become home to the Golding family. Alfred Golding, aged 29, from Swaffham Bulbeck, works as a Blacksmith. He is married to Elizabeth Golding, aged 35, hailing from Quy. They have a daughter, 1 year old Dorothy May.

By 1913, according to Kelly’s Directories, Alfred Golding was running a newsagent and tobacconist’s shop at 58 Kingston Street. He is reported to have died 2 November 1918 aged 37 (death notice in Cambridge Independent Press, 15 Nov 1918, page 8).