A Family Living On Their Own Means 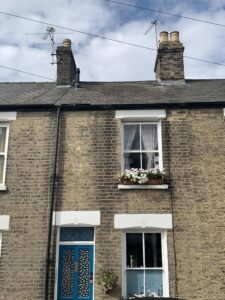 Head of household is George Gentry, a 32 year old carpenter and joiner.  He is married to Emily, 34.  The couple and their eldest child, Herbert (12), were born in Bocking, Essex.  There are a further five children, Charles, 9, Inez, 8, Bazil, 6, Bertie, 4, and one year old Lily.  The older children are all scholars and were born in Thaxted.

Lily was born in Saffron Walden, so the family hasn’t lived in Cambridge for very long.

In 1891, 63 Kingston Street was home to retired couple William and Eliza Ann Contrell and their son William. Eliza Ann, aged 61 and hailing from Hampshire, is married to William, a 66 year old from Cambridgeshire. Both them and their son, 22 year old William E. Contrell, are listed as ‘Living on their own means’ despite William E being working age.

By 1911, Number 63 is home to Susan Maria Dale, a 66 year old from Deptford, Kent. She is married to John Dale, a 69 year old Boot Repairer from Camberwell, then in Surrey.