A Laundress and a Bricklayers Labourer 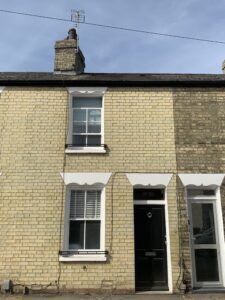 Head of household in1881 is David Male a 43 year old whitesmith & hot water fitter.  David waas born in Dry Drayton and is married to 44 year old Henrietta (nee Grout), who works as a laundress.  Henrietta was born in Newmarket.

Jane is working as a domestic servant in Tottenham in 1891.  She married oil & colourman’s assistant Walter William Thurbon in 1894.

Rosa is working as a domestic servant to publican Charles Crack at 3 Thompson’s Lane “The Nine Pins” in 1891.

In 1891 at 59 Sturton Street, Henrietta is now head of household.  David has died at some point and she is now living here with her four youngest children. David is 18 and working as a labourer, Nora is a laundress like her mother,  Elias is working as an errand boy for the post office and John is 12 and still at school.

By 1901 Henrietta is living at 3 Flower Street with her son John (working as a miller’s porter) and granddaughter Henrietta Tingey (Minnie’s daughter).  The houses on Flower Street at that time were standing where the children’s play area is now located.