A fireman, a laundress, a market stall keeper, a draper's assistant, an errant boy, a builder's carman and a yard foreman 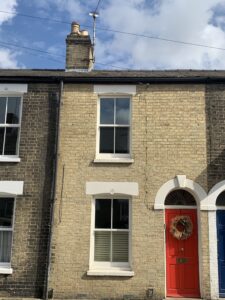 Head of household is Robert Rowling, a 29 year old fireman, who was born in Trumpington.  He is married to 28 year old Harriet and the couple have two young sons.  Walter is 5 and George is 8 months.

In 1891, 64 Kingston Street was home to the Kefford family. 48 year old widow Rebecca Kefford works as a Laundress. Her eldest daughter, 25 year old Sarah Kefford, also works as a laundress, presumably with her mother. Rebecca has three other children: 23 year old Walter, working as a Stallman (market stall keeper); Lizzie, aged 18, working as a Drapers assistant; and James, aged 16, working as an Errand Boy.

By 1901, 64 Kingston Street is home to the Nunn family. Alice Nunn, aged 25, is married to George Nunn, aged 31, a Builder’s Carman from Lidgate, Suffolk. They have three children: Harriet, aged 4, Florrie, aged 3, and Arthur, aged 1.