The Family of a Timekeeper 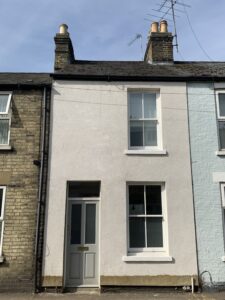 The Census for 1891 and 1901 record Joe Disbury Baker and his family family living  at 71 Sturton Street.

Joe was born in 1845 in Chesterton, the son of an Engine Driver. He first trained as a whitesmith, but when he was 20 Joe joined the Royal Artillery as a Driver. He spent the majority of his service in India, with one campaign in Egypt.

On the 5th of February 1872 he married Anna Sophia Elizabeth Wood, daughter of George Wood, at St. James Church, Baroda (now known as Vadodara).  Anna was born in Poona, India.  The 1911 Census records that the couple had ten children, three of whom died, however, not all records can be found.

Joe was discharged from the Royal Artillery on the 7th of June 1887.

The Electoral Register shows that Joe and his family briefly lived at 56 Covent Garden before moving to 71 Sturton Street by 1891.  The 1891 Census records Joe as a 45-year-old timekeeper for the Board of Commissioners.  Anna is “Hannah” on all the census records.

Alice is 15, Maud is 12, Martha is 10, Frederick is 8 and Sophia is 5. Louisa has left home and is working as a maid, she never marries and by 1939 is living at 16 Kingston Street with her widowed sister Alice.

By 1901 only Frederick, Martha and Mabel are at home with their parents.  Alice has left home and is working as a servant on Market Hill.  She marries Arthur Pearce in 1921.

Between 1906 and 1911 Joe and his family live at 47 Great Eastern Street. For these few years a William Samuel Brown is living at the property.

Sometime after the 1911 Census, however, the Electoral Register for 1911 shows Joe back at 71 Sturton Street until his death in 1914.  Anna stayed at the property until her death in 1921.

Frederick is a general labourer in the sewers.  He married Gertrude Pearson in 1926 and lived at 71 Sturton Street until 1952.  The 1939 register notes that he was an ARP in the Second World War.