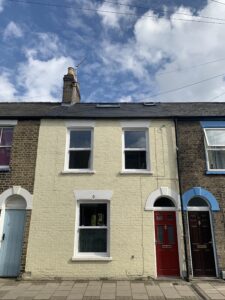 Head of Household is Jermyn Brown, a 32 year old tailor who was born in Cambridge. He is married to Londoner Eliza, 28, who works as a dressmaker.  The couple have a three year old son called Bertram. In 1891 they can be found at 23 Sturton Street.

In 1891, 72 Kingston Street is home to the Ingle family. Smith Ingle, a 27 year old Railway Shunter, is married to Kate Ingle, aged 25. They have two children: Harold, aged 3, and Lilian, aged 1. Living with them is Smith’s mother 50 year old Sarah Ingle. They have one boarder, 33 year old Walter Day, a plasterer.

By 1911, Number 72 is home to the Thrower family. Frederick Thrower, a 53 year old Railway Guard from Norfolk, is married to Angelina, a 55 year old from Bury St. Edmunds. They have two children: Charles Louis, a 18 year old Telegraphist, and Frances Edwin, a 13 year old schoolboy.