The Family of a Wood Carver 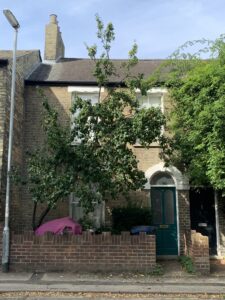 Head of Household in 1881 is James Lincoln, a 37 year old wood carver from Norwich.  He is married to Emma (nee Ayres), aged 36 and born in Cambridge.  They have three children in 1881.  Arthur James is 7, Agnes Emma is 5 and Frederick J is 4.  All children attend school

By 1891 Arthur is 17 and now an apprentice wood carver.  Agnes is an apprentice dressmaker.  Frederick is still at school, as is new daughter Louisa Ethel who is 7 years old.

In 1901 Frederick is now 23 and a scientific instrument maker. Louisa is 16 and a pupil teacher.

The 1911 census records that Emma and James have been married for 38 years and have four children.  Arthur is back at number 34 at the time the census and is still a wood carver, he is 37.  Frederick continues to make scientific instruments, he is 32.

Their daughter Louisa died in 1923, she is also buried in Mill Road.

Electoral registers show that John and Emily Fordham were living here between 1920 and 1936.  They have moved from 43 Sturton Street.