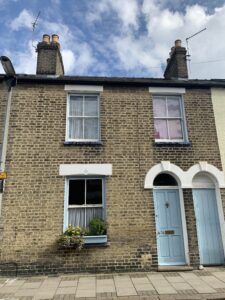 Head of household is Thomas J Humphrey, a 29 year old railway porter.  He is married to Annie, 31.  The couple are from Ailsbury in Hertfordshire and have three young children.  Irene is 4, Ethel is 2 and Hubert is 8 months old.  They were all born in Cambridge.

In 1891, 74 Kingston Street is home to the large Fuller family. Anne Fuller, a 48 year old widow, lives with four children and her mother, alongside a lodger. Anne, who hails from Warboys, Huntingdonshire, works as a housekeeper at a local Reading Room. Her eldest son, William Fuller, aged 20, works as a Laboratory Assistant. Maud Fuller, aged 18, is a teacher. Her two younger siblings Mabel, aged 14, and Alfred, aged 11, are too young to be in work and likely too old to get free education. Anne Fuller’s mother Mary Collins is a 72 year old widow, also hailing from Huntingdonshire, listed as ‘living on her own means’. Their lodger, 18 year old Frank Rute, works as a plumber.

By 1901, William and Maud have left home; Alfred, now 21, works as an Assistant Schoolmaster, while Mabel is now 24. Anne’s mother Mary Collins still lives with her daughter.

By 1911, Number 74 is home to the Biggs family. Rosena Biggs, a 30 year old from Harston, is married to Alfred George Biggs, a 33 year old Banbury, Buckinghamshire, who works as the labourer for Railway Signal fitters. They have four children: George, aged 9, in school; Marie, aged 7, in school; Doris, aged 5; and newborn Ivy.