A Butcher's Man & a Grocer 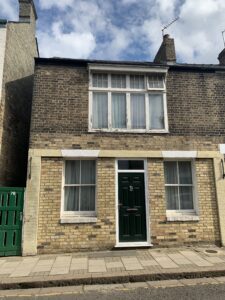 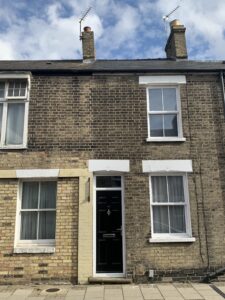 The large family of John and Loomes lives here in 1881.  John is 38 and a painter, born in Ampthill, Bedfordshire.  Emma is 39 and works as a dressmaker, she was born in Cambridge.  The couple have seven children.  The eldest is Elizabeth, 16; she isn’t a scholar, but there is no occupation listed for her.  Edith, 14, Percy, 11, Albert, 10, Agnes, 8, and Rosamond, 6, are all school children.  The youngest child is 3 year old John William.  All the children were born in Cambridge.

In 1891, 78 Kingston Street is home to Jonathon and Mary King. Jonathon, aged 71, hailing from Huntingdonshire, work as a ‘butchers man’. He is married to 50 year old Mary King from Norfolk. They have 2 boarders: 20 year old Joseph Brown, from Norfolk, and 21 year old Frances Cooke, from Yorkshire. Both Joseph and Frances work as Clerks on the railway.

By 1901, 78 Kingston Street is home to the Gilbert family. Eliza Gilbert, a 31 year old from Beccles, is married to Alfred Gilbert, a 34 year old working as a Grocer’s assistant. They have three daughters: Ethel, aged 9; Lily, aged 7; and newborn Ivy Victoria. Also living with them is Alfred’s brother Frederick Gilbert, a 17 year old Soap Factory Hand.

By 1911, the Gilberts are still resident at number 78. Alfred Gilbert, now 44 has now become the Grocer and Provision dealer, rather than working as an assistant. Eliza is now 41, and Lily, now aged 17, works as a domestic Nurse. Ethel and Ivy are no longer at this house; likely they have left home, though Alfred and Eliza have now had another Child, 8 year old Alfred Gilbert, who is attending school.