Head of household in 1871 is John Ayres, a 31 year old journeyman whitesmith.  Sturton Street was unnumbered, but Southsea Cottage is named on the Census. John is married to Louisa Harriet (nee Hawkins) and they have four children.  Louisa Elizabeth is 8, Alfred William is 6, Charles is 4 and Frederick John is 1.  The couple were both born in Southsea, Hampshire.  Louisa was born in Plumstead, but the boys were all born in Cambridge.

John’s brother, Robert B Ayres, is living with the family.  He is 20 years old and a labourer at the ironworks.

By 1881 the couple have had another two children.  Margaret Fanny (Maggie) is 6 and Arthur is 3.  John is working as a whitesmith and employing two boys.  Charles Henry is working as whitesmith’s apprentice.  Louisa is recorded as “mother’s assistant” and the three youngest children are all scholars.

Alfred is 16 and boarding with a carpenter in Sawston.  He is working as a clerk in a leather factory.  By 1890, however, he is living in Nebraska.  Alfred married and became a Reverend, he is buried in Arlington Cemetery, Nebraska.

Charles married Georgiana Faulkner in 1888.  The couple live at 33 Sturton Street, and then 34 Kingston Street.

The family are living at 33 Trumpington Street in 1891.

Frederick married Mary Elizabeth Craft in 1889. In 1891 the couple are living in Newnham Croft and Frederick is a painter.  However, the Cambridge Independent Press of the 5th August 1898 records that he has a bicycle stolen from his premises at 33 Trumpington Street. Frederick is now a cycle agent, “Ayres Bros.”

John and Louisa Ayers are buried in Mill Road Cemetery with their youngest son, Robert, who was born in 1882.

This family have moved from 74 Sturton Street.

Head of household is 38 year old James Sword, a Police Constable who was born in Hethersett, Norfolk. He is married to Elizabeth Ann (nee Thorogood), 43, who was born in Great WIlbraham.

The couple have six children.  William James (17) is an apprentice tailor, while Arthur John (16) and Thomas Octavius (13) are errand boys.  Herbert (11), Annie Elizabeth (6) and Frederick George (4) are all school children.  All the children were born in Cambridge.

William married Florence Maud Sargood in 1898.  He remained a tailor and the couple moved to Plumstead.

In 1901 James is 41 and has retired.  Herbert, now 21, is a clerk, Annie works as an upholsteress and Frederick is a telegraph messenger.  There is also a nine year old daughter called Alice Mary.

By 1911 James, Elizabeth and Frederick (by then a postman) are living at 5 Homerton Street.

Elias and Frances have another son, Ronald Elvin Miller, who was born here in 1913.  Ronald was a Lieutenant in the Essex Regiment during World War 2.  He was killed in action and is buried in Bayeux War Cemetery. 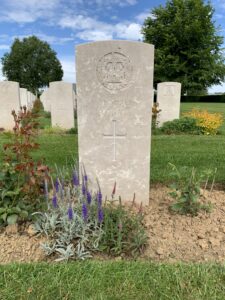 He is remembered on his parent’s grave marker in Mill Road Cemetery. 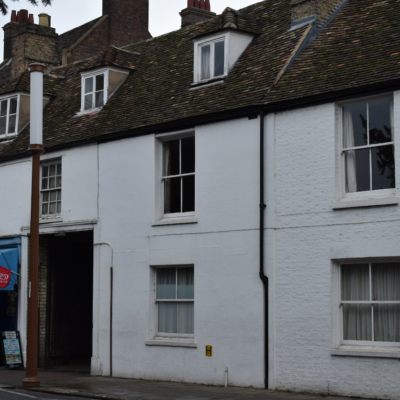