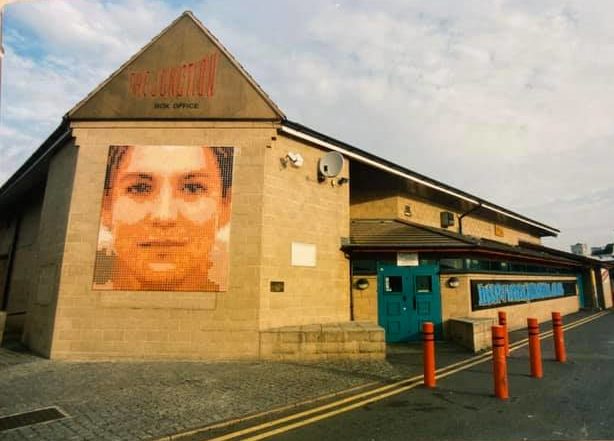 You’re in there somewhere

The UK’s first digital mural – on the front of the original building – was made by Chris Dorley-Brown and Bob Jaroc, who morphed the faces of a 1,000 Junction attenders into the ‘one face’ of The Junction audience. There was no space to host or expand Chris and Bob’s multimedia programme and most of their work was done in one of the dressing rooms.

“The Junction was interested in projects with public participation that embraced new technologies. My job was called Outreach / Community etc. We had one computer and ran workshops that imagined the WebV2 world  in a way, but this was way before YouTube and Facebook, so our exposure was via  cinema and local radio interventions. and making brief clips combining video, graphics, sound and what have you. I remember thinking that the blank wall on the corner of the building was “asking for it”.

I liked Nancy Bursons work, she was making Morphs that were based on statistical information and turning that into pictures, quite powerful political images, and I kind of nicked that idea. I got a local artist called Katie Symes to take portraits of the Junctions audience members at club events and Bob and I scanned these, they were really good photos, Katie did a great job and created a Morphed image of all the pictures, about 350 in all. The final picture was pixellated into 3600 squares of 32 colours. H&R Johnson in Stoke made up the ceramic tiles for free and we got planning permission to attach these to the blank wall.

I think it worked ok, the idea was to give the users of the building some kind of stake in the fabric of the place and to remind everyone what the place was intended to be about. The mid 90’s were an interesting time because we were all getting to grips with computers and converging technology, so it was an open playing field and everyone was feeling a bit experimental and it was fairly easy to get support and funding in that climate.”