'Dedicated to the provision of a live music and community arts venue for the people of Cambridge. They are working in conjunction with the City Council to formulate a solution.'

Peter Ingram remembers: “The Cambridge Music Trust was established by myself and Jay Taylor in the summer of 1984 with the general aim of promoting and assisting live music in Cambridge, and specifically to promote the need for a new live music venue. Collecting the best of the available recorded material we attempted to represent the wealth of Cambridge music talent on a compilation cassette tape. We released the ‘Ways to Move’ album with a view to raising the profile of local musicians, and to raise funds to begin lobbying for a new venue.

After a year of so of promotion and meetings with the City Council, progress towards our goal seemed painfully slow.

In the December 1985 the CMT became the Cambridge Venue Group. This was as a direct result of events of 29th November in which a large number of young people decided to make their feelings known when an ad hoc rave club situated in a disused building (formerly Thakes Cycle Shop) on East Rd was closed, the organisers arrested, and the site surrounded by a police cordon …”

My Time With The CVG – A Brief History Of The Creation Of The Junction by Jem Linsey:

“It was in December 1985 (or maybe January ‘86) when Lyn Disley and I joined the CVG at their second meeting and we continued through to the launch of The Junction and beyond. I had missed the Thakes ‘riot’ and the subsequent meeting with the council but it sparked my interest and proved the need for something to happen. At that time, Cambridge was pretty bereft of night-life for young people. There were a few music pubs: The Alma, The Burleigh Arms, Railway Tavern, Devonshire Arms and, later, The Rock but other than that there was only the Corn Exchange plus a couple of discos/nightclubs. And pubs and clubs were only for over eighteen-year olds! Supposedly.

CVG’s initial task was to complete a feasibility study to prove to the council that there was a need for such a venue. We had to survey addresses in hundreds of streets around the city, knocking on doors and getting people to answer set questions. The target number of completed questionnaires was reached (in the thousands!) and this was submitted to the council. I think that it was at this point that the council realised they had a serious campaign confronting them rather than just dismissing us with what they thought was a near-impossible task. And so the pressure campaigning continued with regular CVG meetings, regular meetings with the council (officers and councillors). Three possible sites for the venue were short-listed and eventually the old Cattle Market one was chosen. So many challenges were met on that four-year journey: resistance and hurdles from council officers, an attempted ‘coup’ (!) by an outfit called Vagabond, dwindling numbers of the CVG membership due to frustration, impatience or just plain life. Great people came and went and somehow, with a dedicated and persistent few, the CVG survived.

The ‘rave’ in Fyfes warehouse marked a point, I feel, which forced further action by the council. After that, they provided free of charge the Guildhall for ‘legal raves’ which gave us an interim venue and an opportunity to start raising funds on our side. They appointed a very enthusiastic and supportive Eric Orme as development officer for the venue – he was the main link between CVG and council – and we set about creating various committees and events to help raise awareness. We hosted a tent at a Strawberry Fair, plus there were two series of Comedy Underground in the car park of the council offices on Regent Street. This was in the early days of alternative comedy and proved very successful with a weekly programme of two performances per night of, then unknown, acts such as Punt & Dennis (hosts for both series, I think), Steve Coogan, Jack Dee, Jo Brand and many more.

To get some friendly advice and tips, we visited Norwich’s Riverside venue which was an up and running venue similar to the CVG’s vision and we kept on continuing the campaign, including the competition for the name in the Cambridge (Evening) News. Paul Bogen was appointed to the position of director, the Arts Council awarded an important grant, a deal with Red Stripe was struck (I knew Paul Wells of Charles Wells brewery, who owned the brand in the UK) and the building went ahead – a very exciting moment for all involved or who had been involved. I can’t remember exactly how long the place took to build, a year and a half maybe, but steered by Paul Bogen (who was local to Cambridge) and his team, it opened in February 1990 and progressed with a program of music events, theatre, comedy, workshops and more. From quite early on Paul attached The Junction to Trans Europe Halles, which suitably placed it on the cultural map. I served on the management board until mid-1993 when I left for a new venture in Poland and I can’t believe it is still going strong, stronger even, thirty years later! Well done to all those involved in its creation, development and continuing success.” 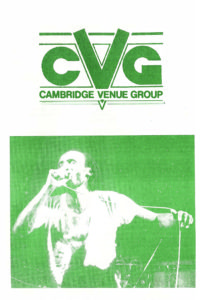 The Cambridge Venue Group – Why?

‘For several years now there has been an unsatis­factory feeling from the people of Cambridge, during this time, music lovers of all persuasions have been forced to make do with a variety of unsuitable venues such as small, overcrowed pubs, echoing council cham­bers and disused buildings, and, artists have no
choice but to isolate themselves in their houses due to the lack of meeting places and suitable workshops. Mounting tension came to a head last year, when a group of people held several free parties in
disused premises, namely ‘Thakes Cycle Shop’ on East Road and the empty ‘Rob Roy Inn’. These spontaneous events proved to be an outlet for this tension felt by many of the Cambridge residents. Following this the Cambridge Music Trust organised a Rock concert in conjunction with the release of the ‘Ways to Move’ tape. This successful gig proved the support that the provision of a permanent entertain­ment venue would receive. Shortly after these events the next positive step was taken by ‘Vagabond Promotions’ to promote live music and theatre in Cambridge for the benefit of
self-supporting groups, and to gain support for the necessity of a permanent venue.

These and many other groups have now formed into The CAMBRIDGE VE?UE GROUP, who are dedicated to the provision of a live music and community arts venue for the people of Cambridge. They are working in conjunction with the City Council to formulate a
solution. The group are at present conducting a feasibility study in order to investigate the need for such a venue, with regards to the scope of act­ivities required, the practicalities of location and details for costing. 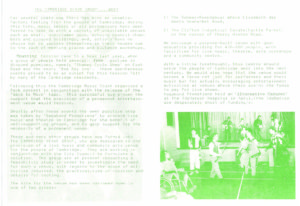 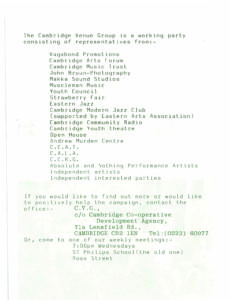