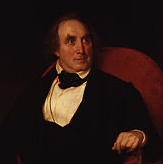 The Barnwell Theatre was opened in 1814 [1816?], designed by William Wilkins. This replaced the theatre that had been next to the Sun Inn for seven years. This itself had probably been built to replace a more temporary booth at Stourbridge Fair. . Wilkins was a plasterer by trade who had taken over the circuit of theatres in East Anglia built for the touring company, the Norwich players. Wilkins was also an antiquarian and architectural researcher and had been employed by King’s College to make repairs to the chapel. However, William also had a son called William who had read maths at Caius College and shared his interest especially in architecture. He inherited his father’s theatres in 1815 and it is difficult to distinguish the contributions to their theatre business about this time.

During its life of 63 years Barnwell Theatre was visited in turn by many great actors, generally supported by the players of the Garrick Club e.g. James Sheridan Knowles, William Macready and Charles Kean. 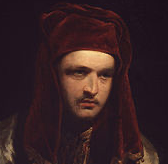 In 1833 Sherdian Knowles appeared as the hero in his own popular tragedy of ‘Virginius’. Three years later Macready appeared in the same role and also acted the lead roles of Macbeth and Othello. In 1860 Cambridge saw Kean and his wife in a performance of Louis XI.

One tradition was the staging each year on Horse Fair night of Lillo’s highly coloured and popular tragedy of ‘George Barnwell.’ The theatre was always crowded and free fights were frequent.

In 1855 the Cambridge Amateur Theatrical Society was founded. Harry T Hall was the first President of the Society. It owed its existence to the Crimean War. At a time when numerous organisations were raising money for alleviate the plight of wounded soldiers, as well as widows and orphans of those killed, the Theatrical Society in Cambridge was one of the most effective fund-raisers. This success led to demands that the work of the Society should continue. The programmes were generally light – including comedy and farce -but they did perform Shakespeare. The Soceity was still using the Theatre Royal in 1868.

Charles Dickens gave readings in the theatre and personally supervised the production of Little Em’ly.

In the Spring of 1875 it was hoped in Cambridge that there would be a visit by the American evangelists, Dwight Moody and Ira Sankey. United Prayer Meetings were held, not only in the Guildhall and the Y.M.C.A. but also in the Theatre Royal, Barnwell. The Barnwell meetings proved so popular that it was decided, even though Sankey and Moody did not visit, to continue the meetings in the New Street Ragged School.

The Theatre Royal was faring badly but managed to survive until July 1878 when it was put up for sale. W T Mowell of Corpus Christi College and those who had assisted in holding the New Street meetings decided to buy the theatre and convert it to a non-sectarian Mission Hall. At the auction however their first unsuccessful bid was £1,200. Ion Keith-Faulkner, son of the Earl of Kintore, persuaded them to increase their bid to £1,650, but the successful bidder was Robert Sayle who intended to modernise the theatre as a place of entertainment. Once Robert Sayle knew the intention of W T Mowell and other though, he let them have it for £1,200. On 18th November 1878 the theatre was opened as the Barnwell Theatre Mission Hall.

Royal Commission Survey of Cambridge 1959: Former Theatre Royal, known originally as Barnwell Theatre, subsequently as the Festival Theatre, now a store … it was built to replace an earlier theatre in Barnwell in 1814 (Cambridge Chronicle 11 Feb., 10 oct 1814), ‘ the fronts of the boxes are painted in arabesque and the proscenium which is supported by four Giallo Antiquo ,marble pilasters is really simple and magnificent … the frieze is ornamented with figure in rechausee d’or representing Apollo and Minerva visiting the Muses; the design of the proscenium is carried through the Act Scene…’ In 1815 William Wilkinssen., ’eminent builder in this town’, appeared in a lawsuit as owner and in 1832 a Mr Wilkins owned six theatres, at Norwich, Bury, Cambridge, Ipswich, Yarmouth and Colchester (ibid. 1832)….. the theatre is of interest for the retention of the early 19th century arrangement of the auditorium. 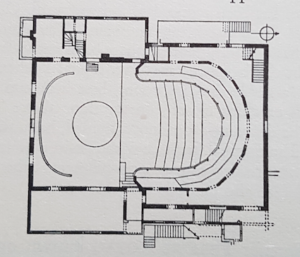 In the 1920-40s it was revived as a theatre. Terence Gray took over in 1926 and renamed it the Festival Theatre. He redesigned the stage using the ideas of Edward Gordon Craig. In particular he constructed a permanent cyclorama.

There were two distinguished Directors of Music in the 1930s. Walter Leigh held the post until 1932 and was succeeded by Arnold Cooke who stayed until 1934 when he was appointed a professor of music at the Royal Manchester College of Music. Both men had studied under Hindemith in Berlin.

Terence Gray was a millionaire racehorse owner and vineyard proprietor who gave the Gog Magogs to the Cambridge Preservation Trust.

The theatre closed in 1939, but then was used by Jean Holmes as an entertainment centre for soldiers. She has seen thousands of troops arrive in Cambridge after Dunkirk and camp out on Parker’s Piece with nothing to do. Her response was to get together a group of entertainers called the ‘The Cam Merrymakers’. At first performances took place at the Newmarket racecourse in the open air but then she was given the use of the Festival Theatre by the council. She recalled cooking eggs for 250 soldiers one morning with Terry Thomas and Yehudi Menhin.

After the war it served as a store for electrical goods, then theatre costumes. the last theatre performance was “The Seagull” in October 1997. It was bought by the Windhorse Trust and became the Cambridge Buddhist Centre in 1998. The building retains a lot of features of its theatrical past. 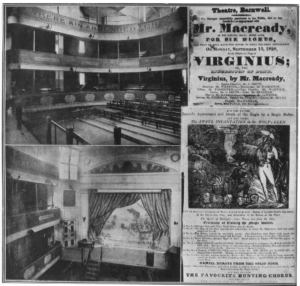 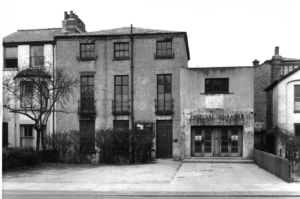 More information about the theatre can be found: 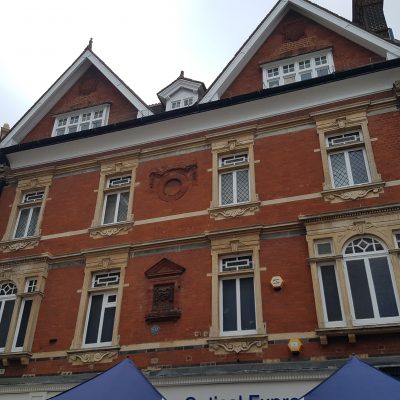