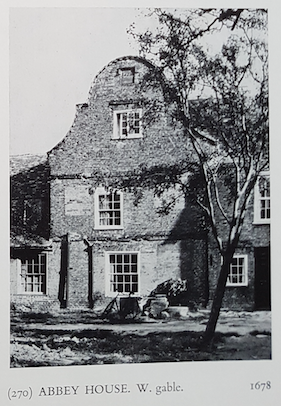 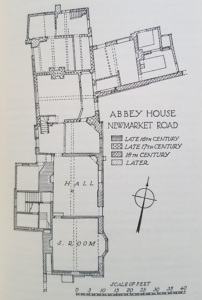 This is a 17th century house built on the site of Barnwell Priory. Parts of the old ecclesiastical buildings survive. 40 yards of medieval stone wall run ENE from the house, part repaired in brick 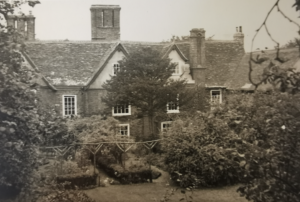 Back of Abbey House

A Wikipedia article can be found here:

A detailed Cambridge City Council report can be found here:

Also see The Inheritors of Barnwell Priory by P V Danckwerts in Proceedings of the Cambridge Antiquarian Society, 1980.

The Royal Commission Survey of Cambridge 1959: in the main it is the work of three periods, the late 16th, the late 17th and the early 18th century, but many minor alterations and additions have been made since…. Th original timber framed building is T shaped and comprises the S half of the house. in 1678 a large brick addition almost doubling the size of the foregoing was made on the N.  ……. It was given to the Cambridge Folk Museum by Lord Fairhaven in 1946. Abbey House, though with many botched alterations, is a building of much character with a dated ‘Dutch’ gable. It contains panelling of c. 1700. … In the garden are numerous wrought stones presumably from the priory.

Enid Porter in Cambridgeshire Customs and Folklore, p147f, recounts some of the ghost stories associated with the house. She said that there was a tradition that a tunnel ran from the house to Jesus College!

John Badcock, as the last Prior of Barnwell Abbey, surrendered all the Priory’s possessions to the king on 30th November 1538 and was subsequently granted a pension of £60. He is said to have continued to farm the priory’s lands and tithes in Cambridge after the dissolution. At the time of his death he held the living of St Andrew-the-less in Barnwell. 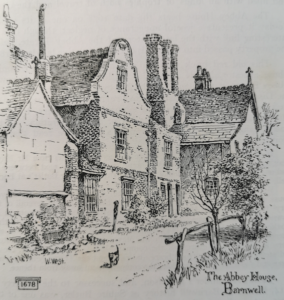 1601: Settlement by T Wendye on his son William on his intended marriage

1655-6: Manor of Barnwell conveyed to S Browne and J Knight

1675: Succession from Nevile to Ambrose Butler

A B Gray writes in detail about the house. The Barnwell estate was acquired by Nevile Alexander Butler in 1659, the first owner to reside there after the Dissolution. He revived an old custom of entertaining each year on 16th June the Mayor and Corporation. It is recorded in Alderman Newton’s Diary that on 14th June 1669:

the Mayor in his Gowne with Marsh the Serjeant in his Gowne and with the mace, before the Mayor, the Aldermen and rest in their cloaks went to Barnwell Abbey to Mr Butlers who complimented us and afterwards Mrs Butler came whom the Mayor and Aldermen onely saluted; there at Mr Butlers charge all the company had Gamon of Bacon, cream, and stewed pruens and strong beere and cake and the Towne sent wine and sugar and soe after the Treat done the company went away from thence …. 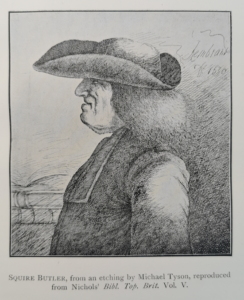 1678: House modernised and almost doubled in size. Outside made flush with brick skin and the inside panelled.  1678 date on gable end.

Alexander’s grandson, Jacob, successor to the property in 1714, was known as Squire Butler. He was a graduate of the University, six feet four inches tall, and at the time of his death in 1765 at the age of 84, the oldest Barrister in England. A B Gray quotes this passage from a History of Barnwell (1830):

His coffin, which was made from a large oak by his express order, some months before his death, became an object of public curiosity; it was of sufficient dimensions to contain several persons, and wine was copiously quaffed therein by many who went to see it. To … one of the Legatees, the singular trust was delegated of driving him to the grave, on the carriage of a wagon, divested of the body; seated in the front, he was to drive his two favourite horses, Brag and Dragon, to Barnwell Church, and should they refuse to receive his body there, he was to return and bury him in the middle of the grass-plat in his won garden; part only of his request was complied with … The loss of a favourite dog, about two months before his death is supposed to have accelerated his end; upon this event being announced to him, he explained “I shall not live long, now my dog is dead!” From that instant he was taken ill, and never recovered.

Mr Butler. having obtained a suit at law, which if he had lost would have ruined him, caused the following lines to be inscribed on his carriage:

Cambridge to wit;
The bite is bit:
I will magnify thee, O Lord,
For you have set me up.

He was the owner of Stourbridge Fair field, no doubt the source of his wealth and was very strict in seeing that the Charter of the Fair was complied with:

If the ground was not cleared by one’ o’clock on the day appointed (if any booths etc were standing), he had them pulled down and took the materials away. One day he drove his carriage amongst the rockery-ware, and destroyed a great quantity of it, because the ground was not cleared at the time mentioned in the Charter. The giants and dwarfs, who came for exhibition at the Fair, were usually invited to dine with him.

A fire in 1731 destroyed many properties in Barnwell but Abbey House survived.

Florence Ada Keynes writes that Thomas Panton, Chief Groom, or Equerry, to George II, and master of the King’s “running horses” bought 1763 land all round Fen Ditton – he lived in Ditton Hall. His purchases included Sturbridge Fair Ground, the Leper Chapel, the Barnwell Priory site and probably other land.

The priory and other land nearby was acquired by Rev. Dr James Geldart. He described himself as ‘Lord of the Manor’ at Barnwell but it does not seem that there was ever a manor in a legal sense. He leased the Abbey House to George Pryme who became the first Professor of Political Economy in the University. He lived in the house until 1847. From this year the house seems to have been divided into three tenements. Cambridge street directories suggest that one middle-class family occupied the ‘grand’ 16th cent. rooms and two artisan families the rest.

The Barnwell property changed hands several times. The Abbey House found tenants, the rest was neglected.  Geldart died in 1879. Rev H R B Streeten in subsequent sale bought ‘The Abbey House’. Did not include Newmarket frontage.In 1886 the estate was bought by Joseph Sturton who made roads and sold most of the land in small plots. Enough land was enclosed to for a garden for the Abbey House. 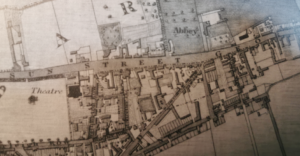 His son, Arthur Askham, moved into the house about 1922, and lived mainly in the part known as No.2. He owned the Hippodrome in Auckland Road. He sold the house in 1945 for £3,675 to Lord Fairhaven of Anglesey Abbey.

The Lawson family lived here. Professor Lawson was a Fellow of Pembroke College. He wrote a description of the two ghosts that the family had encountered at the house, the ‘animal’ nicknamed ‘Wolfie’, and the ‘nun’.

A B Gray relates a story from the beginning of the 20th century. Some of the younger members of the family who lived there at the time were wont to see a diminutive hairy creature stalk slowly around their play room. The children referred to the visitor as Furrey. However not all the children could see the figure even when their attention was directed towards it.

Enid Porter recounts that a young naval officer came to stay at the house during WWII but was forced to leave and stay elsewhere because of the mysterious happenings.

For many years the old Abbey House was divided into three parts, the latest owner being Mr Thomas Askham who occupied the central part. In 1945 the freehold was bought by Lord Fairhaven of Anglesey Abbey with the intention of the house being reunited and used for the good of the community.

1946: declaration of Trust in favour of Folk Museum

1955: Professor Stratton, president of the Society for Pyschic Research, got permission to occupy Abbey House for a week and set up a rota of watches by University staff and students.

1964: conveyance by Fairhaven to Folk Museum. Museum leased Nos 1 and 2 as one dwelling to Professor Peter V Danckwerts and Mrs L A Danckwerts who moved here from York House, 83 Newmarket Road.

There is a detailed description of the House at the time the Danckwerts family lived there in ‘Life on the Edge – Peter Danckwerts GC MBE FRS’ by Peter Varye, 2012. One of its interesting features was a five seater toilet.

1977: tenancy of whole house to Prof Peter and Mrs Danckwerts 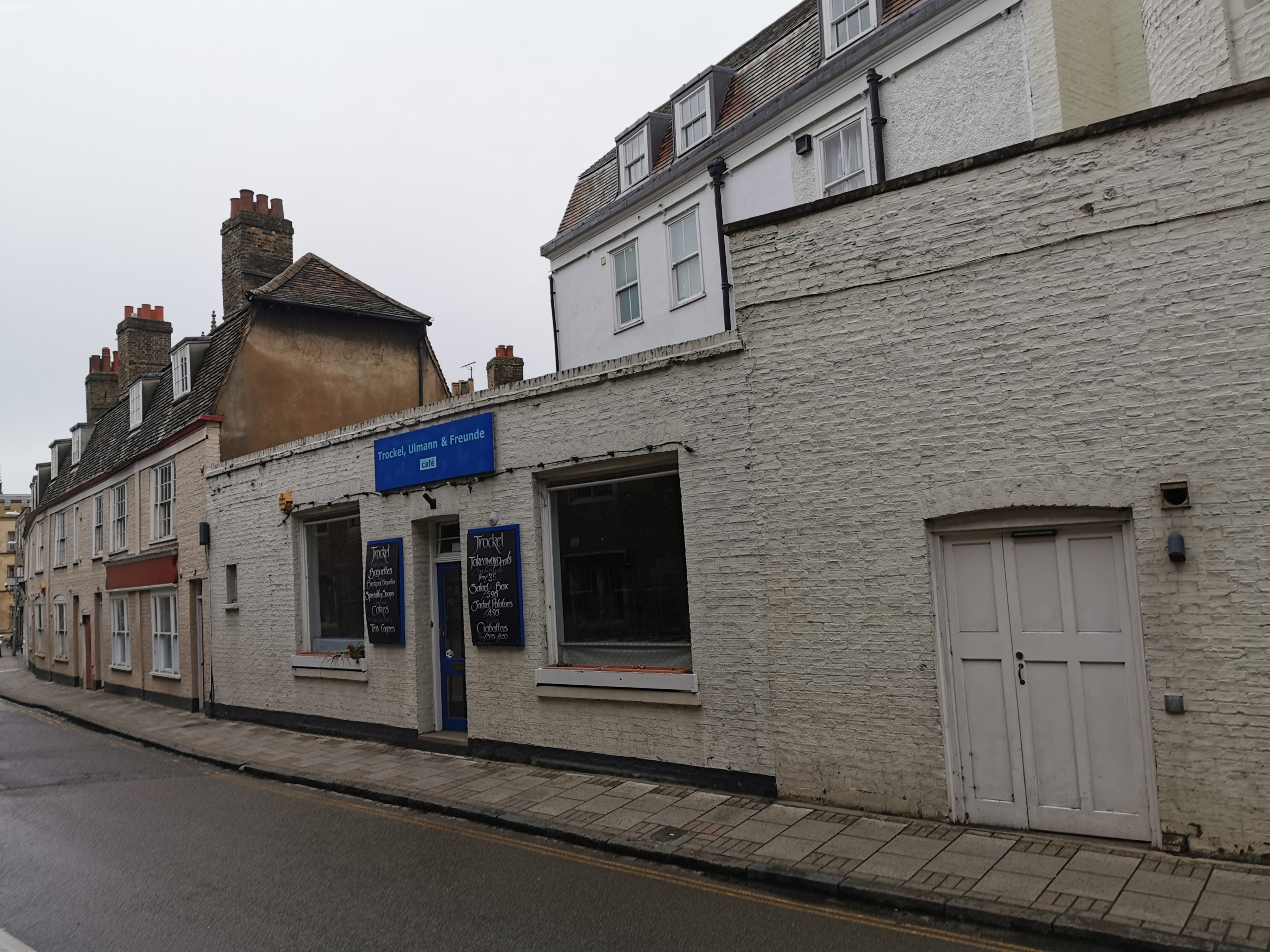 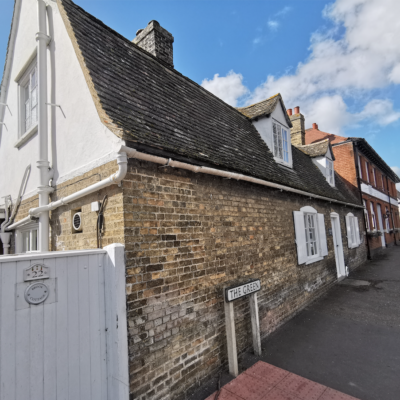