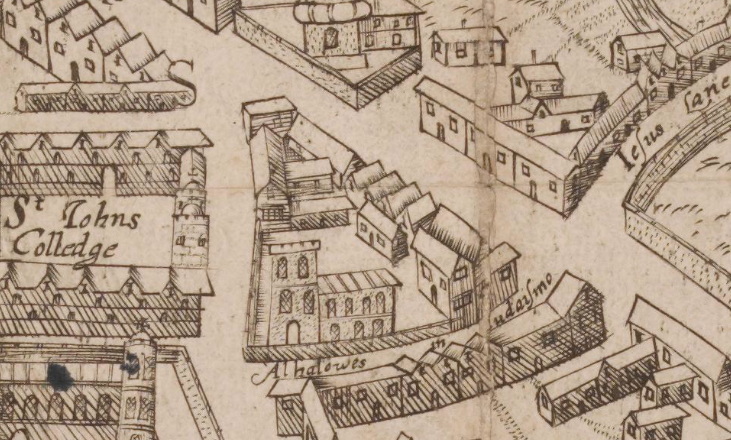 1574 map showing All Hallows in Iudaismo

In the 13th century the quarter called the Jewry was that between All Saints by the Hospital and the Round Church. The lane now known as All Saints’ Passage is called the Jews’ Street (vicus Judeorum) about 1219;  a number of grants of that period to St. Radegund’s are of land in All Saints parish, ‘in’ or ‘next to the Jewry’, and both St. Sepulchre and All Saints are described in 1279 as being in the Jewry (in Judaismo).  There is clear evidence also that Jews lived in the parishes both of St. Clement and of the Holy Sepulchre,  and the Jew Bonenfaunt, hanged about 1275 for clipping coin, owned a void place in which King’s Hall was later interested.  Cole believed, on the other hand, that the Jews congregated chiefly in the area between Butcher Row (now Guildhall Street) and the old Guildhall.  It is certain that they had a synagogue on the site of the Guildhall, by the house of Benjamin the Jew.  Stokes, the leading authority on the subject, believes that the Jews moved from the neighbourhood of the Guildhall to that of All Saints:  in any case, there is no reason to think that they were ever officially segregated; they lived side by side with Christians.

There were Jews in Cambridge by the time of Niel, Bishop of Ely, who pawned a silver cross to the Cambridge Jews presumably about 1140.  From their contribution to the tax levied on all the Jews of England in 1159, it seems that the Cambridge Jewry ranked fifth amongst those of England, after London, Norwich, Lincoln, and Southampton. It was to two Cambridge financiers that Richard of Anesty applied for loans in the same year; one of them, Comitissa, had many such transactions, and her son continued in the business.  In the mid-13th century the Jews were making an important contribution to estate development by advancing ready money to country gentlemen.  The list of bonds in the Cambridge Archa for the years 1224–40 gives a very good notion of the extent to which burgesses and country gentry were drawing on Jewish capital; Harvey fitz Eustace is among the debtors. This led to some resentment on the part of the lesser nobility and may account for the brutality with which the ‘disinherited’ barons from the Isle of Ely raided the Jewry of Cambridge, slew many of its inhabitants and carried off their valuables on 12 August 1266; ignoring the special command of Henry III in the previous April that none should molest the Jews and their property.

The Jews of Cambridge, like those of many other towns, sent representatives to an assembly in 1241 which agreed to pay the king 20,000 marks, but three years later another tax of 60,000 was imposed before the first one was paid off. The contribution of Cambridge was over £110.  The records of the Exchequer of Jews show that over 60 Cambridge Jews were lending money to Christians in the period 1234 to 1270, and Jews from Cambridge are found taking part in financial transactions in at least five other towns. They constituted undoubtedly a very important element in the economic life of the Borough. But their business activities were cut short abruptly by the grant to Eleanor, the Queen Mother, in January 1275, that no Jew should dwell in a town which she held in dower. As a result Jews were expelled from Cambridge, as from Gloucester, Marlborough (Wilts.), and Worcester, fifteen years before their general exodus in 1290. The chest of debts was transferred to Huntingdon and, when the inquisitors visited Cambridge in 1279, their houses had apparently escheated to the queen  and had in many instances been purchased by burgesses. Only some twenty houses are enumerated as having belonged to Jews.

As moneylenders the Jews were replaced by the goldsmiths, such as William Barbour, wealthiest of the Cambridge residents rated for the subsidy in 1512, or Nicholas Symond, one of the alien immigrants, who became a freeman of Cambridge in 1521 and town treasurer in 1531.

There is an article on the Jews of Medieval Cambridge by R B Dobson 1990. 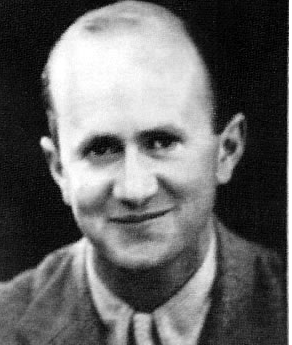