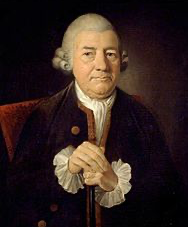 History of the Manor House of St Radegund

Cadell and Davies 1808 guide to Cambridge says that at the Dissolution this religious house passed to Jesus College. The original building burned down in the reign of Queen Elizabeth I.

An article on BNO about the Priory of St Radegund which later became Jesus College can be found here:

the Benedictine nunnery of St Radegund’s, was a more humble institution, as women’s houses generally were. Its location just outside the bounds of the medieval town, however, meant that its premises and estates were valuable properties which were converted into Jesus College in 1496.

The nunnery had existed in the 12th century and accumulated gifts of land. Although there were only about 12 religious residents, by the 15th cent. the nunnery was running a large farming estate. There was an annual market in the adjacent Garlic Lane (now Park Street).

The church of the nunnery still survives: it is now the Jesus College chapel. It has lost the original aisles, sidechapels and most of the nave; outside can still be seen a medieval doorway, windows, remains of a prioress’s tomb and a bench where the feet of the poor were washed on Maundy Thursday. 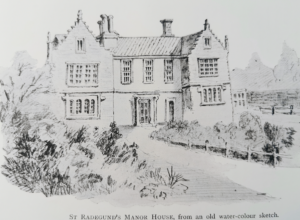 A B Gray adds in Cambridge Revisited:

Turning into Manor Street, the sundry fragments of fluted and other worked stone embodied in the rubble wall on our left, remind us that it is built largely of materials obtained during the extensive restoration of Jesus College Chapel, carried out about 1845. Manor Street forms the eastern boundary of the old manor garden, whilst All Saints’ Vicarage stands, more or less, upon the site of the original Manor House.

The latter was demolished about the year 1831, and there is a tradition that it was occupied by John Baskerville, the famous University printer (1758-1765) during his brief residence in Cambridge. By the early 19th century the garden had become a neglected wilderness. 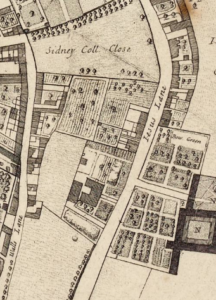 The 1891 census shows a house between nos. 46 and 45 Jesus Lane named All Hallows House that seems most probably to have been the vicarage.

Eglantyne Jebb’s brother-in-law calls for a peace treaty for WWI in 1915 – very similar to, but pre-dating President Woodrow Wilson’s 14 points.