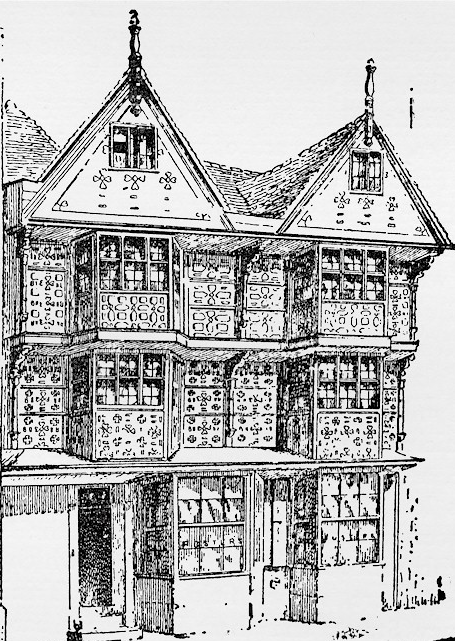 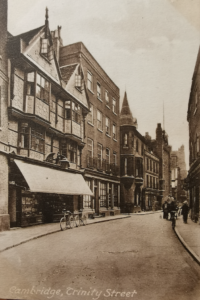 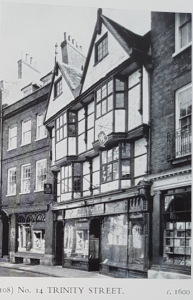 Once the Turk’s Head Inn (much restored), no. 14 shows the heights achieved by Cambridge builders by c.1600. Timber-framed with raised pargeting, it has overhanging upper storeys, two overhanging gables and canted oriel windows. (Pevsner) 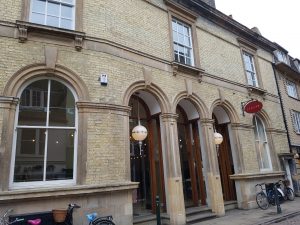 This was a well known coffee house.

13/8/1954: This year marks the 150th anniversary of Lloyd’s Bank in Cambridge. In 1804 two brothers named Foster who were already trading as millers established a bank in Bridge Street. In 1835 they
transferred to the Turk’s Head in Trinity Street and opened branches in St Ives, Saffron Walden and Ely. In those days two members of staff were boarded on the premises, one sleeping on a bed in front
of the strong room armed with a rusty sword. At no time was the building left unattended. In 1890 they acquired a site at the junction of Hobson Street and a new building in Renaissance style was
opened in 1894. The Capital and Counties Bank took them over in 1904 and 14 years later they amalgamated with Lloyd’s. In 1919 the two offices were merged and the Sidney Street premises chosen as the main branch. In 1935 a considerable extension was built on the corner site. (Cam. News)

The Cafe Luncheon and Smoking Rooms

21/5/1976: The Turks Head Berni Inn, Trinity Street, Cambridge, sucks inside an almost relentless stream of visitors. The upstairs bar serves ducking and scampi but we were heading for the simple steak sort of menu. Our two schooners of sherry cost 32p each and the wine, Cotes de Rhone, £2.34. The food was worth a wait. We had rump steak (£1.91) and a fillet steak (£2.73) which were very tasty, with chips, peas and tomatoes. We followed up with chocolate ice creams, which were included in the main course price. We could have had instead cheese and biscuits. Other offerings were Dover sole (£2.44) and Sirloin steak (£1.89).(Cam.News) 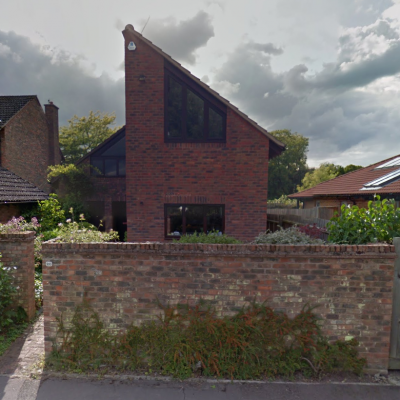 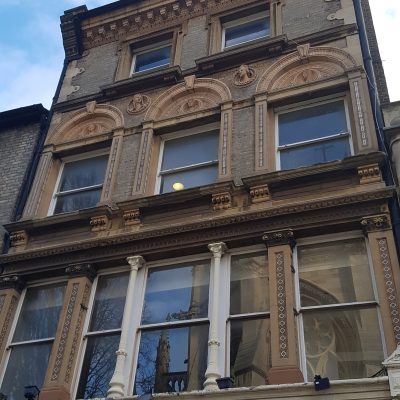