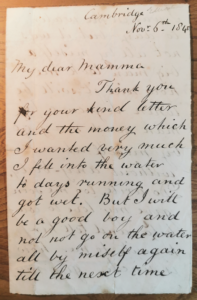 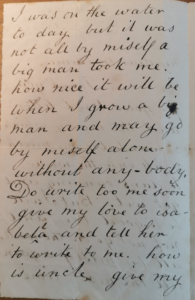 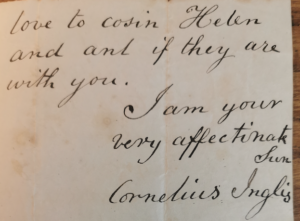 Transcription of script as written:

Thank you for your kind letter and the money which I wanted very much I fell into the water to days running and got wet. But I will be a good boy and nol not go on the water all by miself again till the next time. I was on the water to day but it was not all be miself a big man took me. how nice it will be when I grow a big man and may go by miself alon without any-body. Do write too me soon give my love to isabella and tell her to write to me. how is uncle give my love to cosin Helen and ant [?aunt?] if they are with you.

I am your very affectionate sun Cornelius Inglis

The Ancestry web site has no personal information about Cornelius between his baptism in 1824 and his residence in Marylebone in the 1871 census when his occupation is as MD. In the 1881 census he is an MD retired.

The Cambridge University Alumni 1261-1900 records found online at Ancestry.com note that Cornelius Inglis was admitted a pensioner aged 18 to Trinity in May 7th 1844, son of John Bellingham Inglis. He had been at Rochester school. He took his BA in 1848. He studied at University College London and also in Paris, Vienna and at Edinburgh. He took his MD at Edinburgh in 1853, his MRCS and LSA in 1856. He went on to be a House Surgeon at the Children’s Hospital in Great Ormond Street.

In the 1871 census he is a lodger at 8 & 9 Cavendish Chambers aged 46 described as ‘M.D. not in practice.’ Two other lodgers are both painters and the head of the household, listed after the lodgers, is P Grey, aged 42, steward.

In 1881 he is at 1 Victoria Street, Albert Mansions. He is one of three men described as head of the household. Cornelius is a ‘Dr of medicine retired’, another is a retired Lt Col. of the Coldstream Guards, aged 73, and the third is a porter, aged 38.

Flickr contains photos of a book with a bookplate “C. Inglis M.D.” attributed to Dr Cornelius Inglis b.1824.

The University of Glasgow web site has a detailed commentary associated with this book. It notes that the book was in John Bellingham Inglis’s collection. Cornelius (apparently known elsewhere as Charles) sold part of his father’s book collection in 1871.

The Centre for the Legacies of British Slaveries has details of the will of Cornelius’s father, John Bellingham Inglis (died 1870)  which mentions Cornelius as the sole executor. The website lists various claims associated with St Lucia.

The most apparent oddity of all this is the rather infantile nature of the language of the letter, written by a 21 year old Cambridge student. Was he being facetious? Did he like to adopt this childish manner when writing to his mother? The fact that he has been sent money suggests that he could well be a student.The names mentioned in the letter fit the family connections of the 21 year old we know about from other sources.

There is also a mismatch between his age on admittance to Cambridge University, age 18 in 1844, and the year, 1824, of birth and baptism cited in the Ancestry.com genealogy.

This letter was purchased on Ebay in January 2023. Commentary by Roger Lilley, Museum of Cambridge.