She reminisced about life in Barnwell to ‘Memories of Abbey and East Barnwell p42f.’

I was born in 1922 and lived in Young Street. When I was three I was able to go to school myself as new Street School was in Young Street and just across the road. From my bedroom window I could see into the infant school playground. A high wall surrounded it with glass embedded in the top. It was not possible to see into the infant school or playground from street level. Before the war we often walked to Teversham and watched the Tiger Moths (small light aircraft). I was in the Young Street area until 1942 and we were very close to the first air raid on Vicarage Terrace. It was a very bright moonlit night, and we thought the bombs had fallen in our garden, as the house shook. We had a damp patch in the front room wall after that. We went to see where it was, and saw them doing the rescue operation.it was a very sad time, as we knew the people that were killed.

When I lived in Young Street I played the piano and the piano accordion. we went to see films, swimming in the river, punting, rowing, cycle rides, country walks and tennis.

In my early days the piano was very popular, and many of my memories revolve around music and the piano. i would like to be able to say that I was good and did my practice, but it would not be true. My sister, who was two years older than me, was better than me. On Sundays she played hymns and pieces from the New Chronicle Song Book, like Jerusalem and Annie laurie, which pleased my parents.

One Friday night in winter, which i think was in 1935, i was the only one having lessons, my sister was now working, we heard. loud thump. My dear mum had fallen down the stairs. It was a very nasty fall and we were all upset. My mother in the darkness, had intended to go into the middle bedroom but misjudged the distance between the door and the stairs. My father said ‘that settles it, we are going to have electric light.’ until then we only had one gas light upstairs, which was in the front bedroom, and two more gas lamps downstairs. how wonderful it was to have a light in every room.

I also remember that at least we had a wireless that was always working, batteries and accumulators being a thing of the past. Previously there were occasions when a boxing match was on, and the sound would suddenly fade out. My father would go out and listen outside somebody else’s house.

One day my father came home with a large cardboard box. Inside was a small piano accordion. I was the one that took to it; I spent hours playing it. My mother always used to say to us ‘do not ask your father for anything because he will buy it whether we can afford it or not.’ I can honestly say I never asked my father for a bigger accordion, but one Saturday afternoon, before i was fourteen, he came in with a wonderful 120 bass piano accordion. he had walked all the way more Moore’s shop in town, and jolly heavy that accordion must have been for him. No need to tell me to practice either the piano or the accordion now, I loved it. The girls next door to me also got an accordion, and we both went to Emily Pink for lessons. Emily was a lovely lady, lessons were a pleasure. the Frontalini Accordion Band was formed by her, and before long we were playing at concerts and fetes. We played on Christ Pieces, the Festival Theatre with Michael Walsh, the opening of the Regal Cinema in 1937 – the band with a songer was one of the main acts. We also played in smaller groups for wedding parties. I played sometimes with Sons Dance Band, and Emily was a the main accordion player – I never forgot her.

I played my accordion until April 1942 when I had to register for war work. After that I did not play publicly anymore. The war took three years out of my life. 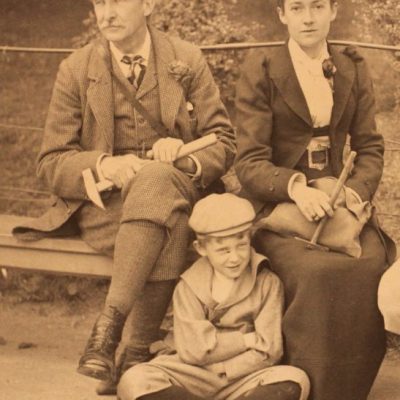