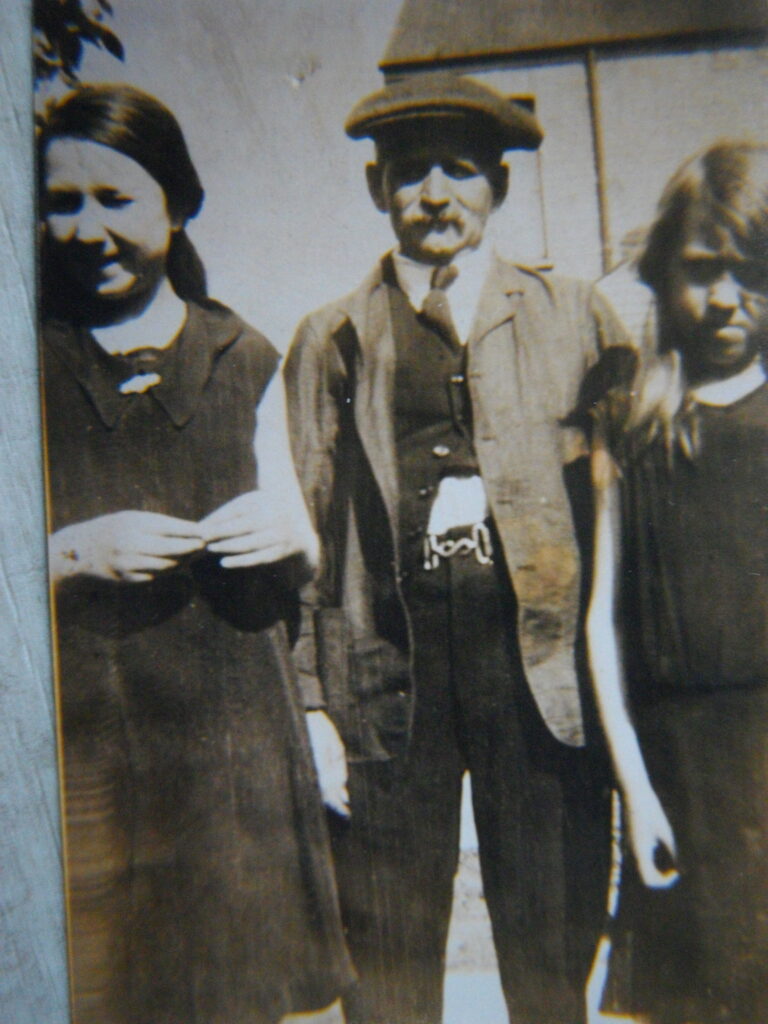 Edgar Frederick Tompkins lived at this address from early 1930s until his death in 1961. Fred had served in the Suffolk Regiment during WWI and had had a serious head injury. He had been brought up in Swavesey. In 1901 the Tompkins family  father George Tompkins, 53, a former private in the Northants Regiment) were living on Middle Watch, Swavesey.

Fred signed up twice in 1914. Fred was of relatively short stature (5’3″ tall, according to his discharge records): he was initially sent home as being “of below standard height,” but managed to re-enlist two or three weeks later when the height restrictions were lifted.

Fred Tompkins has enlisted in Lord Kitchener’s Second Army. He is the son of Mr. George Tompkins, an old soldier, who in spite of his three score years and ten or more, has enrolled in the National Reserve. Information has reached the village that Harry Beaumont, second son of the late Mr. Henry Beaumont, for upwards of 40 years the Swavesey Schoolmaster, who went to British Columbia between five and six years ago, has enlisted for service with the Canadian contingent. 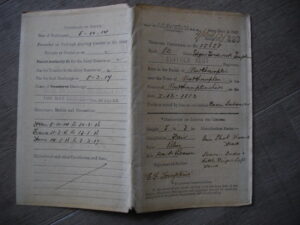 According to DBB in 2021, Fred moved into 97 Burnside sometime in or before 1918.  He lived there for the rest of his life.  I can see no evidence that Sarah Jane (Fred’s first wife) ever lived at 97 Burnside. She spent many years as a resident Fulbourn Hospital before her death in 1955. Beatrice (Beat) Odell was present from as early as 1929/30 (initially under her maiden surname, Odell, until 1938).   By 1939, Beat had started using the surname Tompkins, even though there was no marriage until 1955.  At various stages after 1928, there were lodgers (up to four at any one time, or so it seems) living with Fred/Beat in the Tompkins’ home.  My father (Frank Meredith, born 1929) was living in the house from the mid 1930s onwards.  He appears on the electoral roll for the address from 1950 through to 1953, even though I know for certain that he was living with my mother’s family in London from 1950/51 onwards (and appeared on electoral rolls in London from 1951).

Beatrice Odell was daughter of James Odell, and part of the large Odell family domiciled in the East Road area of Cambridge.  Beatrice (“Beat”) married Fred in Cambridge in 1955, almost immediately following the death of Fred’s first wife, Sarah).

By 1935, my father (Frank Henry Meredith, born 1929 Deptford, London) was also resident at 97 Burnside.  He and his two older sisters had been orphaned in 1934 and Fred became my father’s guardian.  Fred and Beat brought-up my father.  My father’s two sisters were elsewhere: the eldest remained in London, continuing her education, whilst the younger (Ivy) lodged nearby.  The 1939 Register shows Fred, Beat and Frank as occupants of 97 Burnside, together with an apparently unrelated lodger (Joseph Merritt). By 1939, Ivy was living as a lodger in Charles Street and was working at a jam factory (Chivers, I presume; see below).  The taking-in of lodgers seemed relatively commonplace in my memory: I recall the household next door at 99 Burnside having a lodger.

Apart from a short period in the Army, my father lived at 97 Burnside until about 1950, by which time he was working as a fireman on the London North Eastern Railway (trains in and out of Cambridge). 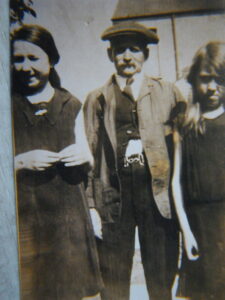 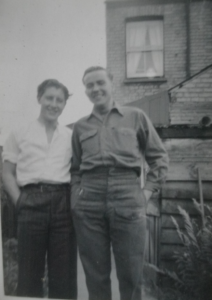 I was born in the mid 1950s.  I have very early memories of 97 Burnside as we used to stay with Fred and Beat (for family “holidays” which generally included a day trip to Hunstanton by train).  I can picture the house very well as I remember it from late 1950s/early 1960s.  There were two rooms plus a scullery downstairs and two rooms upstairs.  Gas mantles were still sited in the two main downstairs rooms; both of these rooms had fireplaces.   The steep and narrow staircase to the first floor was sited between the two downstairs rooms.  The front downstairs room (with the bay window) was the “best room” and was quite bright.  It housed an upright piano and some upholstered furniture along with various ornaments (I recall “fairings” and some “quite scary” fish vases) .  The other room was very dark in comparison.  There was one armchair near the fireplace (where Fred generally sat) and a dining table/chairs.  Fred shaved at his armchair, using a cut-throat razor; a leather strop hung on the wall beside the fireplace.   The main entrance to the house opened into this room: Beat’s coat and hat (with hatpins) always hung next to the door.  I remember little about the upstairs rooms, apart from the metal bedsteads, horsehair mattresses and thick eiderdowns.  There was no bathroom: merely a toilet outside at the back, in an attached lean-to structure with an earth floor.  The only running water was a cold tap at a brown ceramic sink in the scullery (with a black gas stove on the opposite wall).  The garden was not a place for leisure: Fred grew vegetables and there was a chicken coop with run on the right side boundary of the garden.  Fred also had an allotment plot on the community facility at Burnside.  Every Sunday, he would leave the house on his bike and return later with vegetables for lunch: it was common knowledge that his trip included a stop-over at the pub!  In my memory, Fred was employed by Chivers at Histon; I can remember him leaving for work on his bike, and returning home (quite often with quantities of fruit). 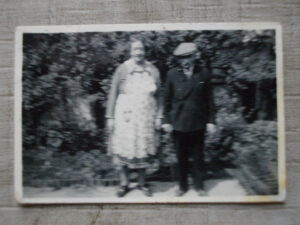 Fred and Beat Tompkins in the 1950

Burnside was a very quiet and somewhat rural area back in the late 50s/early 60s.  I can remember going to the shop on Perne Road with Beat for daily errands. The small wooden footbridge almost opposite 97 Burnside led across the brook to an area of land farmed by someone who was only ever known to me as “Uncle Bob.”  He had a tractor and kept pigs in pens and sheds to the left side of his land,  One of the neighbouring houses to 97 Burnside had a pigeon loft at the end of the garden.  The boundary between 97 and 95 Burnside was planted with Symphoricarpos albus shrubs. 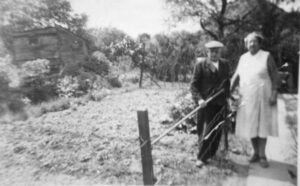 Fred and Beat Tompkins next to Burnside allotments in 1950s

My brother and I were told by Fred that the [cement] works were a Yorkshire Pudding Factory; of course, back in the late 1950s ready-made Yorkshire puddings were not a commodity!

Beat Tompkins remained living at 97 Burnside for about ten years after Fred’s death in 1961 (at the old Addenbrookes).  As she became somewhat frail, Beat moved into a care home (Seymour Street).  She died in 1976 (at Newmarket General Hospital).  There is some uncertainty about Beat’s year of birth: it is strongly suspected that she was born in 1883, so she would have lived at 97 Burnside until sometime in her 80s.  On Beat’s death, the house was inherited by my father and his two sisters and was sold not long after that.  As I understand it, the house was let to tenants for a short period whist Beat was still living but in the care home.  Even then, I am fairly certain that the house had neither telephone nor television installed! 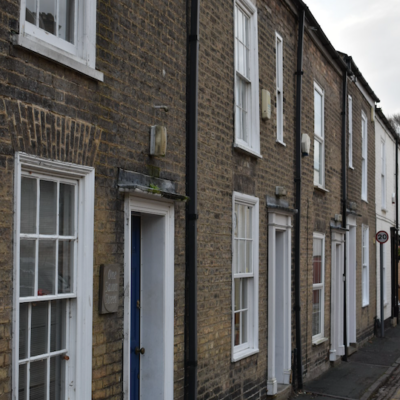