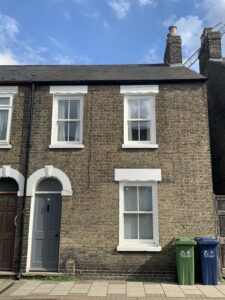 Eliza Robinson lives here with her daughter who is also called Eliza.  The elder Eliza is 56 and widowed.  She works as a laundress; her daughter is 16 and a dressmaker.  They have a lodger, Frederick Headdy, who is brewer from Chesterton.

In 1891, Eliza Robinson is running 14 Kingston Street partly as a boarding house.  We know this because the census lists her as a “Boarding House Keeper”. However, also present is her widowed daughter Mary Bidwell and Mary’s son Harry Bidwell who works as a Librarian’s Assistant.

There are two boarders at Number 14: Herbert Flack, a 28 year old Insurance Agent from Middlesex, and Herbert Peters, a 21 year old Railway Clerk from Cambridgeshire.

By 1901, 14 Kingston Street is the home of the Wilderspin family. Emily Wilderspin, aged 29, is married to 28 year old Herbert Papworth Wilderspin, working as a Carpenter. They have two young children, three year old Eveline May, and newborn Cyril Lesby.

By 1911, Number 14 is home to Alice Sewell, a 24 year old from Norwich, who is married to Arthur Sewell, a 25 year old working as a Litho Printer. They have one son, 2 year old Harold.