A Slater & a Telegraph Wireman 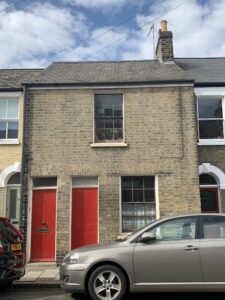 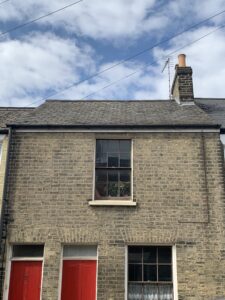 Head of household is Charles Hollings.  He is a 32 year old bookbinder from Cambridge. His wife is 29 year old Rhoda from Hertfordshire.  The couple have a one year old daughter, Elizabeth.  She was born in Belvoir, Leicestershire, so the family haven’t been living at number 17 for very long.

In 1891, 17 Kingston Street was home to the Kent family. James Kent, 41, a Slater (Roofer), lived with his 40 year old wife Susan. Living with them are two of their children: Frederick Kent, 15, a Draper’s assistant, and Ethel Kent, 9, who is at school.

By 1901, this house is now home to James and Emma Bell, a couple from Turnford in Hertfordshire. Emma, aged 41, is married to James, aged 39, who works as a Telegraph Wireman. Also living with them is their niece, Matilda Law, a 16 year old dressmaker from Ware.

By 1911, Emma, now 51,  and James, now 49, still working as a Telegraph Wireman, have taken on a boarder, Sarah Annie Saddler, a 32 year old from Mansfield, working as a General Domestic Servant (though likely not as Emma and James’s servant).